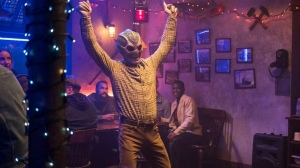 Fresh on the heels of their NYCC Metaverse panel, SYFY has dropped a sneak peek at the first 7 minutes of the upcoming dramedy Resident Alien, starring Alan Tudyk as a space invader tasked with destroying the Earth.

From executive producer and showrunner Chris Sheridan (Family Guy) and based on the Dark Horse comic, the show follows an extraterrestrial accidentally stranded on our planet and forced to masquerade as a small town doctor in Colorado to accomplish his mission. He needs to find important cargo from his downed spacecraft before the winter snow melts and exposes the wreckage, but his quest gets interrupted when the local Sheriff shows up at his front door asking for help in a murder case.

The clip is very promising, balancing comedy and horror with a predictably charming performance by Tudyk as the alien, who is delightfully named Harry. In addition to several fun bits – including Harry’s misunderstanding of certain nuances of human interaction and learning to speak English from hours of Law and Order reruns – there’s a genuinely brutal sequence involving his crash landing and assimilation of a lonely doctor. I’m very curious to see how the rest of the episode plays out, and where the series will go from there.

Based on the Dark Horse comic, SYFY’s RESIDENT ALIEN follows Harry, an alien played by Tudyk that crash lands on Earth and passes himself off as a small-town human doctor. Arriving with a secret mission to kill all humans, Harry starts off living a simple life… but things get a bit rocky when he’s roped into solving a local murder and realizes he needs to assimilate into his new world. As he does so, he begins to wrestle with the moral dilemma of his mission and asking the big life questions like: “Are human beings worth saving?” and “Why do they fold their pizza before eating it?” Tomko, Reynolds, Wetterlund and Fiehler star as the big personalities of small-town Patience, Colorado.

You can watch the clip below. Resident Alien premieres on SYFY January 2021.