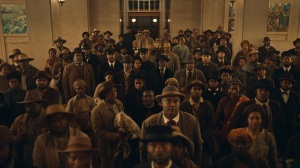 One of the most hotly anticipated streaming events is the forthcoming Amazon limited series The Underground Railroad, based on the celebrated novel by Colson Whitehead and directed by Moonlight filmmaker Barry Jenkins. Jenkins has recently taken to his Vimeo account to release some footage, and today revealed something more traditionally teaser-like. And it is just as gorgeous as you’d probably imagine it’d be.

The Underground Railroad imagines the railroad as both a series of safehouses and secret routes for slaves to safely pass, but also as an actual railroad system. (This is why the novel won the Pulitzer Price for Fiction and the Arthur C. Clarke Award for science fiction.) And that big, bold concept seems to have been brilliantly brought to the screen, using lots of Amazon’s money. The series will star Thuso Mbedu, Chase W. Dillon, Aaron Pierre, and Joel Edgerton and will hopefully debut sometime in 2021 (production was halted due to the pandemic and only recently finished), before Jenkins begins work on a new Lion King movie for Disney. Hopefully, in the meantime, he’ll release many more of these stunning Underground Railroad glimpses.