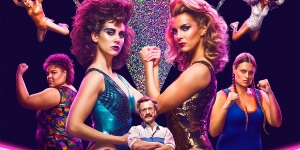 After the Netflix cancelation of GLOW, many fans have been hoping for a movie to tie up the loose ends left by season 3. However, star Alison Brie has said that people should not get their hopes up.

Speaking on an upcoming episode of The Fourth Wall podcast, Brie explained that she was doubtful about a film being made. “I think a movie would be a great way to wrap it up. I’m a little pessimistic about it actually happening just in light of everything that’s gone on this year and how difficult it is to get anything back into production with COVID…. don’t hold your breath because if it does happen, it might take a minute.”

Following strong reviews for season 3, GLOW was greenlit for a fourth and final season. However, industry-wide disruptions caused by the coronavirus (COVID-19) caused Netflix to cancel the show in October. Following the announcement, actor Marc Macron suggested that a two-hour follow-up film would be a good way to wrap up the story.

“I was told they didn’t wanna eat the costs of maintaining the sets… for another five months to begin production,” Macron said in an Instagram live chat. “So, that’s what we heard. And honestly, who knows?… Who knows where we’re going to be in May? Who knows if we’ll even be a country come January that’s functioning? It’s barely functioning now.” He added, “I think what they should do, and I’m pitching this… let us wrap it up in a two-hour Netflix movie. They had the whole season laid out. We know where it’s going to go. Why don’t you give the showrunners and the writers and the cast the opportunity to finish the story in a movie? I think that would be the best thing.”

COVID-19 has caused production issues throughout the entertainment industry, leaving actors and performers across the globe out of work. Though there have been several examples of the industry adapting to a new digital norm– live script reads, Zoom plays and workshops — it has not been a smooth transition. Major releases like Wonder Woman 1984 and Mulan have opted to release on streaming services rather than just in theaters, and many television productions have been urged to shut down or rapidly adapt to new protocols for safety. With no clear end to the pandemic in sight, the future of the industry — and those that work in it — is very uncertain.

Brie said in her interview that despite the disappointment of cancelation, she is happy with the show they created. “I’m going to miss playing with those incredible women and Marc Maron and Chris Lowell. But you know, we’re so lucky. We’re lucky that we got to make three, to me, perfect seasons of a show.”

Inspired by the short-lived wrestling series about the Gorgeous Ladies of Wrestling from the 1980s, GLOW was created by Liz Flahive and Carly Mensch. The series stars Allison Brie, Betty Gilpin, Sydelle Noel, Britney Young, Marc Maron, Chris Lowell and Kia Stevens. Seasons 1-3 of GLOW are currently streaming on Netflix.