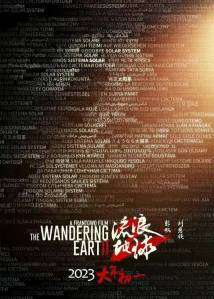 Director Frant Gwo has announced that the sequel to his sci-fi hit “The Wandering Earth,” China’s third highest grossing film of all time, will release over the 2023 Lunar New Year holiday, consistently the country’s biggest movie-going week of each year.

“The Wandering Earth” became a surprise hit after its 2019 Lunar New Year debut, beating competitors including Ning Hao’s “Crazy Alien” and Han Han’s “Pegasus” to top that year’s holiday box office. Produced by Beijing Culture on a budget of around $50 million, it grossed $691 million in China, but less than $6 million in North America. It was later picked up by Netflix.

“After two years of pre-production and thinking about the script, we’ve decided to initiate our shooting plan for ‘The Wandering Earth 2,’ and at the same time have set our release date for New Year’s Day 2023,” set to fall on Jan. 22, Gwo told the public during China’s Golden Rooster Film Festival, which concluded at the weekend. Though a title has yet to be announced, the script is largely completed, he said, adding: “Next, we will try to begin new production processes, and will involve more new technologies.”

The sequel will again be directed by Gwo, produced by Gong Ge’er, and supervised by sci-fi titan Liu Cixin, who wrote the original 2000 novella from which the first film was adapted.

“The preparation work for ‘The Wandering Earth 2’ has already been ongoing for some time. We have created a new world full of science fiction elements and are looking forward to audiences discovering new, better plots and more details,” Gong said.

Fu Ruoqing, vice chairman of China Film Group, which is backing the sequel, said that the challenge of shooting the sequel will spark a rising tide that will lift all boats, improving technical standards in a manner that will benefit the film industry at large. “ ‘The Wandering Earth 2’ will explore ways of streamlining and standardizing production that hopefully will make films get better and better,” he said.

A new poster issued for the sequel features the phrase “Goodbye Solar System” written out again and again in numerous languages. “There is a feeling here of the earth setting sail, with the sun on the right side indicating that we will move forward towards a brighter world,” Gwo said of the poster. Promotional materials and events featuring Wu Jing seem to indicate that the bankable star of the original will return for the second installment, despite his character meeting a seemingly inescapable bad end in the first.

An extended, 3D “special edition” version of the original film that runs 12 extra minutes is currently back in cinemas, where it has grossed $500,000 since its Nov. 26 debut, ranking a low ninth at the box office Tuesday local time beneath the Harrison Ford-starring “Call of the Wild.”

Liu’s Hugo Award-winning trilogy “The Three-Body Problem” is set to be adapted into a high-profile TV series by “Game of Thrones” creators David Benioff and D.B. Weiss alongside writer-producer Alexander Woo for Netflix. The announcement has stoked early controversy due to objections from U.S. politicians concerned about giving such a platform to Liu’s work given his support of Chinese government policies in Xinjiang, a region where an estimated one million ethnic minority Uyghurs have been placed in internment camps.

Expectations in China remain high for “The Wandering Earth” sequel, where fans accustomed to the lightening speed production schedules of most Chinese blockbusters bemoaned a release date so atypically far in a future. “Still two whole years to go, but I’m so excited!” wrote one user on China’s Twitter-like Weibo social media platform.