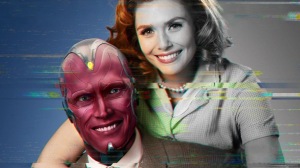 Surprise! Marvel has announced a new MCU television show titled Marvel Studios: Legends is coming to Disney+. As the MCU heads into Phase Four in 2021, Marvel Studios is actively bringing television into its grand storytelling design. Legends is just the newest show in Marvel‘s upcoming TV line-up. It joins an already overflowing MCU Phase Four TV slate that includes WandaVision, The Falcon and the Winter Soldier, Loki, and Hawkeye.

Marvel Entertainment announced Legends first thing Tuesday morning. According to Marvel, Legends is “a new series that will showcase individual characters viewers have come to know and love over the years and revisit some of their most iconic moments.” The first two episodes of the MCU show will focus on Wanda Maximoff (Elizabeth Olsen) and Vision (Paul Bettany). Both episodes will premiere on Disney+ on Friday, January 8, 2021 — just one week before the premiere of WandaVision.

Also provided in Marvel Entertainment‘s announcement for the new show were synopses of Wanda and Vision’s respective episodes. It sounds like each episode will look back on each character’s MCU journey thus far, sort of like a clip highlight reel. But — and this is an intriguing “but” — it also sounds like there might be some teases about what is coming down the pike for each character, too.

Here is the synopsis for the Wanda episode of Marvel Studios: Legends:

“Wanda Maximoff made her debut in ‘Avengers: Age of Ultron’ as a powerful adversary of The Avengers, only to become an even more powerful ally. Wanda found strength in herself and in her extraordinary relationship with one highly unique individual, Vision. ‘Marvel Studios: Legends’ explores Wanda’s story as she grapples with cruel hardships and loss, a chaotic power that she strives to control, and shifting loyalties from those she trusts most.”

And here’s the synopsis for the Vision episode:

“Born into the world in ‘Avengers: Age of Ultron,’ Vision chooses to fight on the side of humanity, though he himself is an artificial form of life. ‘Marvel Studios: Legends’ follows Vision on his quest to understand humans more fully, evolving to be more like them, as he explores a romantic relationship with Wanda Maximoff in ‘Captain America: Civil War.’ All of this leads to his final moments, as he makes the ultimate sacrifice for mankind, leaving those he loved to an uncertain future.”