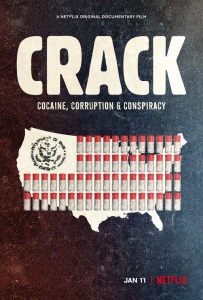 Netflix just released a trailer for the upcoming documentary film Crack: Cocaine, Corruption & Conspiracy from award-winning filmmaker Stanley Nelson. The film is an in-depth examination of the crack epidemic in the 1980s – specifically, how it was the explicit result of one of the most nefarious conspiracies in the country’s history and the devastation it wrought upon Black and Brown communities that continues to this day.

The trailer is gripping, presenting a film told via a vast collection of contemporary news footage and sound bytes interspersed with present day interviews. Crack looks to be a powerful indictment of both the government and the media’s role in using the crisis to further vilify and stereotype the Black community, and the hypocritical way in which the war on drugs targeted (and continues to target) the victims of drug abuse.

Nelson issued a lengthy statement via Netflix explaining his motivation behind the project and how the pervasiveness of the epidemic at every level of society and government required the film to have a similarly epic scope:

“…I wanted to make this film because I feel strongly that the impact of the crack era hasn’t been fully scrutinized. Crack fueled racial and economic inequality, hyper-aggressive policing, mass incarceration, and government corruption at the highest level. Though films have been made about the 1980s, outside a handful of magazine shows there has been little examination of the crack era. The archival clips we use in the film convey how the media sensationalized crack, demonizing “crack mothers” and predicting a generation of “crack babies,” while failing to get at the community destruction and government failure that was really going on. Now that we are decades past the peak of the crack era, we can look at its long-lasting impact in a clear-eyed way.Our goal was for viewers to feel the pervasiveness of crack… We used a lot of archival footage of the streets – drug dealers on street corners, people waiting on unemployment lines…The film charts the trajectory of cocaine from a Wall Street party drug to the broad devastation of poor communities. We also examine the role of local and federal government, which had a clearly inadequate and racist response to the growing crack epidemic. At the very least, the government looked the other way; at worst, the federal government conspired to aid drug smugglers…As a filmmaker, what really interests me is how the past can help us to make sense of the present. Stories about subjects like the crack era, the Black Panther Party, the Freedom Riders, Emmett Till – when told accurately – are critical to understanding who we are as a nation today, and impact our ability to shape the future.”

You can watch the trailer below. Crack: Cocaine, Corruption & Conspiracy debuts on Netflix January 11.