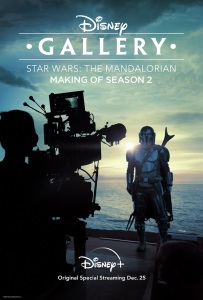 Apparently, it’s a big week for Disney+ announcements. Earlier this week, we learned a new MCU show would be debuting on the streamer in 2021. Today, Disney announced making-of special for the ongoing series Disney Gallery: The Mandalorian would be arriving at the end of December. The first season of Disney Gallery premiered on Disney+ back in June of this year. Over the course of eight episodes, fans were given a behind-the-scenes look at the show from series creator Jon Favreau and executive producer Dave Filoni.

Now, we’ll be able to go even deeper into  The Mandalorian Season 2 with this new making-of special. According to Disney, the “Making of Season 2” special will be one, hour-long episode. Fans can expect new interviews with the cast and crew, on-set footage captured during filming on the new season, insights into the introduction of the Jedi Ahsoka Tano and aging bounty hunter Boba Fett, and much more. Disney Gallery‘s “Making of Season 2” special is set to hit Disney+ on Friday, December 25.

While all of this teasing ahead of the special is fun, it’s still hard to get a sense of what exactly we will be presented with. The entirety of Disney Gallery has a runtime of close to four hours of content, spanning a variety of production areas including cast, directors, score, and the process of filming the Star Wars show. The “Making of Season 2” special sporting a one-hour runtime teases a more focused, fast-paced special that will touch on the highlights on the latest season rather than hashing out every minute production detail (ostensibly because many of the production elements from Season 1 remain unchanged).

Here’s the official synopsis of the Disney Gallery: The Mandalorian Season 2 special:

“From the triumphant return of legendary bounty hunter Boba Fett to the live-action debut of fan-favorite Ahsoka Tano, the second season of ‘The Mandalorian’ is a fun, surprising, emotional thrill-ride which has kept fans excited to see how each new weekly chapter will unfold. Disney+ will bring viewers behind the scenes of the groundbreaking season in a new hour-long “Making of Season 2″ special, premiering December 25 on the streaming service.In this new installment of ‘Disney Gallery: The Mandalorian,’ filmmakers and cast provide unprecedented access to the storytelling decisions and innovations that went into the second season of the Emmy Award-winning series. Featuring immersive on-set footage that places viewers right in the middle of the filmmaking process, and rare insights from the cast and crew, this special documentary explores the production of all 8 episodes in Season 2 – from early concept art through the groundbreaking technology introduced in the series.”