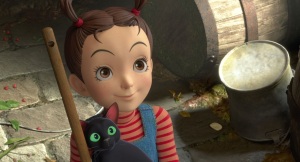 HBO Max’s aggressive strategy for 2021 dominance, debuting films simultaneously in theaters and on the Warner Media direct-to-consumer platform, has just revealed an additional surprise. Thanks to HBO Max’s deal with Japanese animation powerhouse Studio Ghibli, the studio’s latest, Earwig and the Witch, will debut almost simultaneously in theaters and on HBO Max. It’ll hit select theaters on February 3 and start streaming on February 5, per a tweet from Studio Ghibli’s US partner GKids.

What’s super cool about this, too, is that you can choose the original Japanese language track (the movie premiere on Japanese TV last month) or the newly recorded English dub with Kacey Musgraves, Dan Stevens and Richard E. Grant providing voices for the first fully computer-animated Studio Ghibli feature.

Earwig and the Witch is based on a novel by Diana Wynn Jones, whose Howl’s Moving Castle was adapted by Studio Ghibli co-founder and figurehead Hayao Miyazaki in 2004. This new adaptation was directed by Miyazaki’s son, Goro Miyazaki, who has directed two previous films for the studio – Tales from Earthsea and From Up on Poppy Hill. The synopsis for the film sounds magical and is perfectly Ghibli-y: “In 1990s England, Earwig, a 10-year-old orphan girl who grew up without knowing that she is a witch’s daughter, is taken from the orphanage by a strange duo and starts living with them.” And while some fans have questioned the studio’s use of computer animation, it’s worth noting that Goro directed the animated television series Ronja, The Robber’s Daughter, which was pretty enchanting and also fully computer generated (the series used a more videogame-y cel-shading technique, while the movie is fully Pixar-style 3D animation).

The film received an Oscar-qualifying run, which means it will compete with frontrunners like Pixar’s Soul and Cartoon Saloon and Apple TV+’s Wolfwalkers and while it’s tough to find proper reviews of the film online (odd, considering how widely it was broadcast on Japanese TV last month; it’s the studio’s first made-for-TV-movie since 1993’s lovely Ocean Waves), one from blog Unseen Japan seemed to be positive, with some caveats: “I can say that I enjoyed Earwig, but I can’t say that unreservedly.” You know what, I’ll take it!

Earwig and the Witch remains the first Studio Ghibli production since When Marie Was Here back in 2014. (2016’s The Red Turtle was an international co-production.) After that, Miyazaki had decided to close up shop and that’s what they did, sadly (co-founder and arguably the greatest artistic voice at the studio besides Miyazaki, Isao Takahata, passed away in 2018). But with Earwig and the Witch coming out and Miyazaki working on a new feature film (he just turned 80 this week), supposedly with a smaller crew and a longer, more relaxed schedule, we can hope that there will be further Studio Ghibli adventures on the horizon. It’s admittedly a huge thrill to get a new Studio Ghibli movie, even if it isn’t totally up to snuff. So the HBO Max announcement is very exciting indeed.