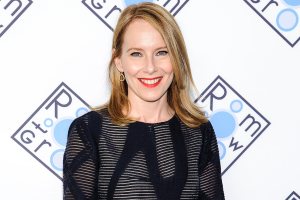 Amy Ryan is set to co-star opposite Steve Martin, Martin Short and Selena Gomez in Hulu’s upcoming comedy series Only Murders in the Building.

Co-created and written by Martin and John Hoffman based on an idea by Martin, Only Murders In The Building follows three strangers (Martin, Short and Gomez) who share an obsession with true crime and suddenly find themselves wrapped up in one.

A series regular, Ryan will play a musician who resides in the building.

She joins previously announced Aaron Dominguez, who plays the son of the building’s super who is returning to the swanky residence after years away.

Martin and Hoffman executive produce along with Short, Gomez, Jamie Babbitt, This is Us creator Dan Fogelman and Jess Rosenthal. 20th Television, part of Disney TV Studios, is the studio.

This is a rare major TV commitment for Ryan who previously did series regular stints on NBC’s The Office and HBO’s In Treatment and The Wire.