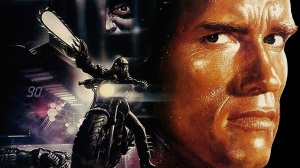 Edgar Wright has said in past interviews that if he could remake any movie, it would be Arnold Schwarzenegger‘s futuristic 1987 thriller The Running Man, and now it looks as if he’ll finally get the chance — sort of.

Wright is nearing a deal with Paramount to develop a new adaptation of Stephen King‘s bestselling novel, which the author first published in 1982 under his Richard Bachman pseudonym. Wright will co-write the story with Michael Bacall (21 Jump Street), who will then go off and write the script. If all goes well, Wright will then direct the new movie, though it’s intended to be much more faithful to King‘s original novel rather than a simple remake.

Simon Kinberg and Audrey Chon will produce The Running Man under Kinberg‘s Genre Films banner alongside Wright‘s longtime collaborator Nira Park of Complete Fiction. According to Deadline, which broke the exciting news, it was Kinberg who brought the idea to Paramount‘s Emma Watts, who then gave him the go-ahead to court Wright for the gig. The project is now a priority for the studio, which also just hired Adam Wingard to direct a sequel to Face/Off.

Set in a dystopian America, the original movie cast Schwarzenegger as a wrongly convicted cop who gets his shot at freedom when he’s forced to participate in a TV game show where convicted criminal “runners” are hunted by professional killers for ratings. Paul Michael Glaser directed the original, which co-starred Maria Conchita Alonso, Yaphet Kotto, Jim Brown, Jesse Ventura and Richard Dawson, the latter of whom played the manipulative game show host.

Wright has the psychological thriller Last Night in Soho in the can and awaiting release this October, and he’s also coming off strong reviews for his music documentary The Sparks Brothers, which premiered at the virtual Sundance Film Festival last month. The notoriously choosy filmmaker actually has several projects in development including Universal‘s kidnapping thriller The Chain, the robot movie Set My Heart to Five, and the supernatural film Stage 13, about a studio backlot haunted by a Hollywood star. Which of these projects would you most like to see Wright tackle next? For me, it’s The Chain, only because I read Adrian McKinty‘s book and can’t wait to see it brought to the big screen. But honestly, as long as it’s not Baby Driver 2, I’ll be fine with whatever.