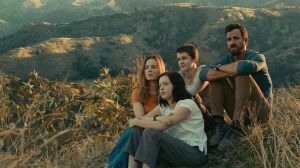 How’s this for a talented family? Justin Theroux (The Leftovers) is starring in the upcoming Apple TV+ series The Mosquito Coast, based on a novel written by Paul Theroux — his uncle! Now we’ve got the first trailer for the Theroux family’s grand adventure, coming to Apple TV+ April 30. And it looks like one intense family reunion.

Theroux stars as an inventor, idealist, and man on the run from a nefarious American government family conspiracy. And he’s taking his family with him — wife Melissa George (The Eddy), daughter Logan Polish (The Astronaut Farmer), and son Gabriel Bateman (Child’s Play). Will they find salvation in Mexico? Or will they simply sprint into more and more danger until Theroux rips his family apart?

The show comes from creator Neil Cross (Luther), who serves as executive producer alongside episodic director Rupert Wyatt (Rise of the Planet of the Apes), both Therouxs, Edward L. McDonnell (Counterpart), and Veritas Entertainment Group‘s Bob Bookman, Alan Gasmer, and Peter Jaysen. This is the second onscreen adaptation of the novel; a 1986 film version directed by Peter Weir and adapted by Paul Schrader starred Harrison Ford, Helen Mirren, and River Phoenix. This new take, a seven-episode series, looks gripping, complicated, and intense — but also looks as though it just might fall into a “white family survives scary brown gangsters” kind of trope we keep seeing in works like Peppermint. Here’s hoping they know how to navigate out of that!

The Mosquito Coast comes to Apple TV+ April 30. Check out the first trailer and official synopsis below.

From award-winning novelist and creator Neil Cross and based on the best-selling book by Paul Theroux, which celebrates its 40th anniversary this year, “The Mosquito Coast” is a gripping adventure and layered character drama following the dangerous journey of a radical idealist and brilliant inventor, Allie Fox (played by Justin Theroux), who uproots his family for Mexico when they suddenly find themselves on the run from the U.S. government.