An image from WandaVision‘s finale teases Scarlet Witch, Vision, and the twins teaming up to save Westview. It was only a few weeks ago that Marvel Studios kicked off Phase 4 with its first Disney+ series. WandaVision ended a long drought of Marvel Cinematic Universe content and has fascinated viewers on a weekly basis. The show has given Elizabeth Olsen and Paul Bettany a chance to shine as Wanda Maximoff aka Scarlet Witch and Vision respectively. But, WandaVision has also progressed them in some significant ways.

Wanda and Vision’s domestic lives in Westview brought them a family, as Wanda gave birth to Billy and Tommy not long after arriving. Much to their surprise, the twins developed superpowers of their own. Billy has magic powers like his mom, while Tommy’s superspeed resembles Quicksilver. Although the entire family now has powers, WandaVision has yet to feature them all working together. Unsurprisingly, it appears that will change during WandaVision‘s finale.

Disney released a new image from the WandaVision finale that shows Scarlet Witch, Vision, Billy, and Tommy all working together. Each member of the family is in a fighting position ready to leap into action – presumably against Agatha Harkness, who was recently revealed to be the series’ true villain. Eagle-eyed fans might also notice that Billy’s hands and fingers resemble the gestures that Wanda makes when she’s doing magic. 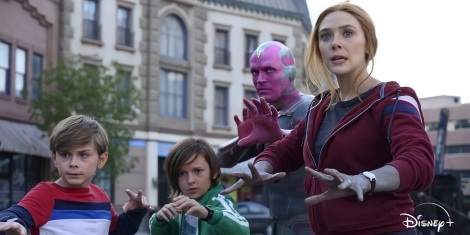 The family team up teased in this WandaVision finale image is long overdue, and it marks the first time they’ve all been together in a few episodes. Vision went off on his own at the start of episode 6 and had yet to return to the family by the end of the last episode. Billy and Tommy were last seen at the end of episode 8 still in the clutches of Agatha Harkness, so them being reunited with their parents here is a good sign that Wanda sets them free.

For as enjoyable as WandaVision has been, the show has not had nearly as much action as many MCU fans would’ve expected. This image should be a good reminder that the finale will be filled with spectacle. The family working together puts two magic users, a speedster, and a synthezoid fighting side-by-side. Since it is likely Agatha or White Vision (or both) is standing across from them, the family’s full powers will be needed to save Westview. Plus, Monica Rambeau has superpowers now and fake Pietro is still around, so there will be no shortage of superpowers in the mix as WandaVision‘s story ends.