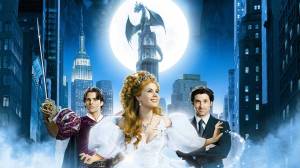 In addition to Adams‘ confirmed return, Patrick Dempsey has also announced he will be coming back for the sequel. But during the live stream, Menken played part of the Oscar-nominated Enchanted song “That’s How You Know,” and gave a few tidbits about Disenchanted. Menken stated that the film is “really good,” and that “it’s filming.” But most importantly, Menken said “Amy Adams is in it. Patrick is in it. Idina Menzel is in it. James Marsden – they’re in it.”

While Adams, Dempsey, Menzel, and Marsden comprise the main cast of the original film, it’s unclear if other actors from Enchanted will also be appearing in the sequel. Even though Susan Sarandon and Timothy Spall were primary characters in Enchanted, this new film might only focus on the real world, as opposed to the animated world of Andalasia.

Enchanted was a major hit for Disney when it was released in 2007, earning over $127 million domestically and $340 million worldwide. The film received three Academy Award nominations in the Best Original Song category and earned Amy Adams a Golden Globe nomination for Best Actress – Motion Picture Musical or Comedy.

As Disney+ grows its library of films exclusive to the streaming service, such as Hamilton and Soul, Disenchanted is another major movie that will help grow the company’s already massive library of offerings. Disenchanted is currently in production, with no announced release date yet.