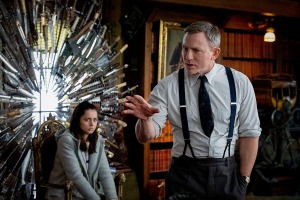 In a major deal valued at roughly $450 million, Netflix has acquired the rights to Knives Out 2 and Knives Out 3, which will be written and directed by Rian Johnson.

Daniel Craig will reprise his role as Southern-fried detective Benoit Blanc, who will be investigating new mysteries on the streaming service. Distributed by Lionsgate, the original film grossed $311 million on a budget of just $40 million, earning Johnson an Oscar nomination for his original screenplay.

Though the eye-popping deal is worth nearly half a billion dollars, it’s important to keep in mind that the figure includes the budgets for both films, as well as buyouts for folks with backend deals such as Craig and Johnson, the latter of whom will produce the sequels with his longtime partner Ram Bergman.

The news came as a genuine surprise to me, as I’m pretty sure Lionsgate was counting on distributing the Knives Out sequel, but as Deadline reports, the first film was owned by Johnson and Bergman, who made a single-picture deal with MRC, which distributed the film through Lionsgate. As such, the producers were free to shop the sequel elsewhere, and they recently held a discreet auction that came down to Apple, Amazon and Netflix, the latter of which ultimately prevailed.

Johnson has finished writing the sequels, and Knives Out 2 is now slated to begin shooting June 28 in Greece, so expect casting announcements to begin in earnest soon. I’d love to see Johnson cast one his actors from The Brothers Bloom, be it Mark Ruffalo, Adrien Brody, Rachel Weisz or Rinko Kikuchi. Who knows, maybe he’ll write a role for someone from Star Wars: The Last Jedi, like Kelly Marie Tran or Laura Dern. Either way, I imagine there will be no shortage of stars lining up for roles in this sequel.

It’s funny, I was talking about Knives Out with my high school buddies just last night during our weekly poker game, and the 8-person table was split on the movie. Some loved its clever ingenuity and star-studded cast, while others, like myself, questioned the logic behind the murder mystery itself.

While I am looking forward to these sequels, I’m hoping that Johnson will rein in Craig‘s over-the-top performance a bit, and not rely so much on cheeky wordplay when it comes to the film’s big twists. Otherwise, I’m all for more murder mysteries with large ensemble casts, and lord knows I’ll be waiting a while longer for Death on the Nile to hit theaters after its most recent Armie Hammer-related delay. With Craig hanging up his 007 tux later this year, I’m glad he’s found a new franchise to keep him busy.