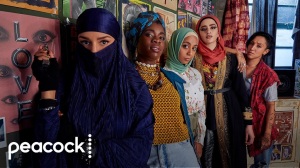 Peacock has just released a teaser for their upcoming musical comedy series, We Are Lady Parts. Produced in association with UK’s Channel 4, the series follows Lady Parts, a Muslim female punk band, as they navigate London’s music scene.

Drawing on her own experiences, and celebrating the diversity of contemporary London, the series is written, created and directed by Nida Manzoor. It will feature original punk songs and covers, written and adapted by Manzoor and her siblings Shez Manzoor and Sanya Manzoor, along with Benni Fregin. The series was originally commissioned for Channel 4 by their Head of Comedy Fiona McDermott, whose credits include Channel 4 favorite Derry Girls.

Sporting a single-camera look and a truly diverse cast, this series brings a fresh feel to Peacock’s lineup. Add in the perspectives of Muslim punk rockers, and you’ve got a recipe for something unique. I’m particularly pumped for a musical comedy that digs into the punk aesthetic, rather than adopting it briefly for a gag (I’m looking at you, Glee and Crazy Ex-Girlfriend). The teaser doesn’t really showcase the music at all, but it’s certainly piqued my interest for more details as the premiere approaches.

We Are Lady Parts is set to premiere on Peacock “soon,” though no official date has been announced yet. Stay tuned for more details, and check out the teaser below.