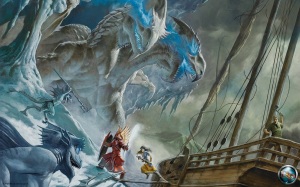 Jonathan Goldstein, director of Paramount‘s upcoming Dungeons & Dragons movie, announced to the world via Twitter that filming for the production was underway. The Tweet consists of an up-close shot of the film’s clapper board with the Dungeons & Dragons logo emblazoned along the top. Goldstein and his co-director John Francis Daley are listed on the board, as well as director of photography Barry Peterson. The filming date on the lower right corner is April 29, 2021. “The campaign begins. #DnD” is the only text accompanying the photo.

D&D fans everywhere have been waiting for a decent Dungeons & Dragons movie ever since the 2000 box office flop starring Jeremy Irons, Marlon Wayans, and Thora Birch. Paramount is taking a different approach with the popular role-playing franchise and doubling down on the star power in order to guarantee the film’s success. We previously reported that major stars like Chris Pine, Michelle Rodriguez, Justice Smith, and most recently Regé-Jean Page Will be starring in the film. But directors Goldstein and Daley, who also wrote the most recent draft of the movie’s script, have been tight-lipped about what the final product will look like.

Goldstein is perhaps best known for writing Spider-Man: Homecoming, Horrible Bosses, and directing the movie Game Night starring Jason Bateman and Rachel McAdams. His co-writer and co-director Daley began his career on the business end of the camera starring in movies like the cult comedy Waiting… alongside Ryan Reynolds and playing Lance Sweets on the hit TV series Bones. He also co-wrote the Spider-Man: Homecoming script with Goldstein back in 2017.

There’s no release date for Dungeons & Dragons yet, but given the all-star cast and the long history of success that the writer/director duo are bringing to the table, it feels like D&D fans will have a lot to look forward to once this movie is ready for the silver screen.