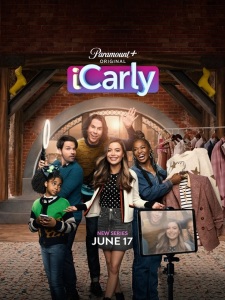 Next on our list of reboots, revivals and sequels is the Paramount+ reboot of iCarly, the popular Nickelodeon television series starring Miranda Cosgrove, which just released its first trailer ahead of a June 17 premiere. The original iCarly series ran from 2007 to 2012, and came from the mind of Nick’s most prolific showrunner Dan Schneider. Cosgrove starred as a teen living in Seattle with her brother, Spencer, who creates a popular web series with her two best friends, Sam and Freddie.

The new series picks up 10 years after the series ended. Following our titular star once again, Carly and her friends, now in their twenties, return to navigate work, love, and family. Cosgrove makes her return to live-action roles with iCarly, after years of sticking to voiceover roles once the original series ended. Jerry Trainer and Nathan Kress also reprise their roles as Spencer and Freddie respectively, but Jennette McCurdy will not be returning as Sam, nor will we see the return of Noah Munck as fan-favorite Gibby. Newcomers to the regular cast include Laci Mosley and Jaidyn Triplett. Mosley will star as Harper, Carly’s roommate and best friend, and Triplett will play Millicent, Freddie’s stepdaughter.

The new trailer seems to be quite similar to the original series, for better and for worse. While Carly and Freddie are now dealing with romance as adults, they are still plagued by Carly’s immature brother and Freddie’s neurotic mother. Trainer’s Spencer continues to steal every scene he’s in, and proves that his iconic wailing baby is still a hit. iCarly also brings back Spencer’s apartment, with some much-needed upgrades (but will we see the return of the Groovy Smoothie?), and dammit, if that theme song isn’t just as catchy as it was years ago.

The trailer also begins with footage of its original series, and that really sets the tone for what the show may be — too similar to its original. I’m not quite sure that the comedy will translate the same way 10 years later. This is particularly applicable to some of its nonsensical, random humor that appeals to millennials, but no longer carries the same weight as it did in the 2010s. Several previous reboots have failed to find the right combination of nostalgia and modernization that makes it succeed in the age of content overload, and hopefully, iCarly will be able to make that jump.

iCarly’s first three episodes will premiere on Paramount+ on June 17, with new episodes dropping weekly on Thursdays. Check out the trailer below.