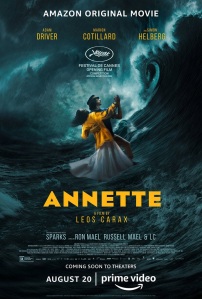 Milan Records has released “We Love Each Other So Much,” the second single from Leos Carax’s upcoming Annette, a musical starring Adam Driver and Marion Cotillard as a romantic pair. Contrary to the first single, which featured a chorus, the new original song brings only Driver’s and Cotillard’s voices to the forefront while the two declare their irrational love for each other.

Annette is shaping to be a curious cinema experiment, as Carax is directing his first work in English from a script written with Ron and Russell Mael of the band Sparks. The band is also composing all the original soundtrack for the musical, which was initially planned to be an album before the Maels met with Carax and presented the project. The three decided, then, to transform Annette into a film.

To make Annette even more mysterious, the film’s official summary tells us the project is named after the child of Driver’s and Cotillard’s characters, a girl that has some grand destiny awaiting for her. However, we barely see Annette in the movie’s trailers, except for a short scene with the girl’s singing shadow. Carax’s next film might have a pinch of fantasy in it, but the director is undoubtedly keeping its secrets until Annette’s premiere.

“Los Angeles, today. Henry (Driver) is a stand-up comedian with a fierce sense of humor who falls in love with Ann (Cotillard), a world-renowned opera singer. Under the spotlight, they form a passionate and glamorous couple. The birth of their first child, Annette, a mysterious little girl with an exceptional destiny, will turn their lives upside down.”

Annette will have its world premiere on July 6 at the opening of the Cannes Film Festival. The movie hits theaters in the U.S. on August 6, streaming on Amazon Prime Video after August 20.