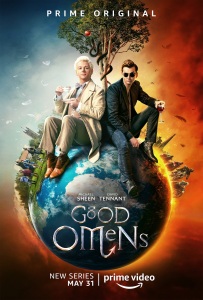 More than two years since the first season of Good Omens was released, Amazon Studios surprised renewed the show for a second season consisting of six episodes which will expand the world of the show and go beyond the original source material.

Good Omens is based on the best-selling novel by Terry Pratchett and Neil Gaiman, who will return to co-showrun the new season alongside director Douglas Mackinnon, while Gaiman also co-writes the new episodes with Josh Cole. The show stars Michael Sheen and David Tennant as the angel Aziraphale and the demon Crowley, respectively, who are forced to team up in order to save the world from the incoming apocalypse. Season 2 is set to start filming later this year.

The first season of Good Omens ended with Aziraphale and Crowley stopping the apocalypse before being accused of treason and banished to Earth after tricking their superiors into thinking they had become immune to both hellish flames and holy water, now becoming free to enjoy the world they saved. Now, while there was never a Good Omens sequel novel, the upcoming Season 2 of the show is set to incorporate some of the unused ideas by Gaiman and Pratchett, who passed away in 2015. In a statement, Gaiman said:

“It’s thirty-one years since ‘Good Omens’ was published, which means it’s thirty-two years since Terry Pratchett and I lay in our respective beds in a Seattle hotel room at a World Fantasy Convention, and plotted the sequel. I got to use bits of the sequel in Good Omens — that’s where our angels came from. Terry’s not here any longer, but when he was, we had talked about what we wanted to do with ‘Good Omens,’ and where the story went next.” And now, thanks to BBC Studios and Amazon, I get to take it there. I have enlisted some wonderful collaborators, and John Finnemore has come on board to carry the torch with me. There are so many questions people have asked about what happened next (and also, what happened before) to our favourite Angel and Demon. Here are the answers you’ve been hoping for. We are back in Soho, and all through time and space, solving a mystery, which starts with an angel wandering through Soho, with no memory.”

Now, that only means good news to fans of the Good Omens TV series, which we had not heard anything about since last year’s Good Omens: Lockdown mini-episode special. Few authors get a chance to finish their unfinished story, especially in another medium, so long-time fans of Gaiman and Pratchett should keep an eye out as we get more details on Good Omens Season 2. You can also check the just-released key art below:

What glorious (and dangerous) trouble will our favorite angel and demon find themselves in this time? 😇😈 Good news! #GoodOmens is returning for Season 2 on @PrimeVideo. pic.twitter.com/cFJQMo0Vkj