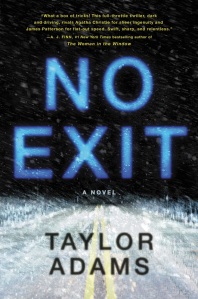 Production has wrapped on suspense thriller No Exit in New Zealand, with the movie heading to Hulu next year. The project will bear the 20th Century Studios logo after Fox was acquired by Disney, and will be released in the United States on Hulu and internationally via the Disney+ Star expansion available to overseas subscribers.

The film centers on Darby, a young woman played by Havana Rose Liu, who finds herself trapped by a blizzard while on her way to deal with a family emergency. Taking refuge at a highway rest stop with a disparate group of strangers, Darby discovers a kidnapped girl stashed in the back of a van in the parking lot, which spirals into a life-or-death scenario that fosters unease and mistrust as she tries to find out which one of her newfound companions is the one responsible.

No Exit is directed by Damien Power, who previously directed 2016’s Killing Ground. Based on the novel of the same name by Taylor Adams, the script comes from Ant-Man and the Wasp duo Andrew Barrer and Gabriel Ferrari, who have also been tapped to pen Toy Story 4 director Josh Cooley‘s animated Transformers movie.

Danny Ramirez, who became an instant fan favorite among Marvel Cinematic Universe fans after playing The Falcon and the Winter Soldier‘s Joaquin Torres, takes second billing behind Liu, with David Rysdahl and Mila Harris rounding out the younger members of the ensemble, with veteran actors Dale Dickey and Dennis Haysbert rounding out the impressive cast.

No Exit does not have an official release date yet, but the film is scheduled to premiere on Hulu in the United States and on Disney+ internationally in 2022.