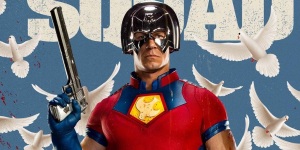 As The Suicide Squad approaches, it’s important to keep in mind that whether he lives or dies, John Cena‘s Peacemaker will return in his own standalone HBO Max series, and to that end, Collider can now reveal all of the directors behind the highly-anticipated show.

We already knew that creator James Gunn wrote all eight episodes of Peacemaker, directing five of them, and he previously let slip that Jody Hill directed an episode as well. As for those other two episodes, Gunn confirmed they were directed by Brad Anderson and Rosemary Rodriguez, who each have experience on superhero shows such as Titans and Jessica Jones, respectively. The impressive lineup of directors was first reported by The Ronin.

Of course, Peacemaker isn’t expected to be a traditional superhero show, as Gunn recently told Empire that it’s not exactly about a hero. In fact, Gunn called the character “a piece of shit,” adding that he’s “not a good guy.” That sounds fairly dark for a superhero show, at least in comparison to some of Marvel‘s offerings, but I, for one, can’t wait.

The first Suicide Squad movie, directed by David Ayer and released in 2016, was rated PG-13, but Gunn‘s version is rated-R, and he’s taking full advantage of that creative freedom. “It just allows me to do anything we want,” the writer/director told aroom full of reporters during a set visit back in 2019.

“It’s James unbound… they’ve taken the cuffs off,” added David Dastmalchian, who plays Polka-Dot Man in the film. “[There are] some moments that are kind of hilariously like, ‘Holy shit, a head just blew up.’ Yeah, some heads will absolutely blow up. There will be brains on this camera.”

Though it’s still unclear whether Peacemaker takes place before or after the events of The Suicide Squad so as to not spoil the fate of Cena’s character in the DC movie, we do know that the actor will be joined by his Squad co-stars Steve Agee as John Economos and Jennifer Holland as Emilia Harcourt, as well as newcomers to the DCEU including Robert Patrick as Auggie Smith, Freddie Stroma as Vigilante, and Danielle Brooks as Leota Adebayo.

Gunn wrote and directed The Suicide Squad, which will hit theaters on Aug. 6, the same day the film debuts on HBO Max. Gunn will next turn his attention to Marvel‘s Guardians of the Galaxy Vol. 3. He’s represented by UTA, The Safran Company and attorney Andrew Hurwitz.

Hill shares a similar comedic sensibility with Gunn, and is best known for his work with Danny McBride on the HBO shows Eastbound & Down, Vice Principals and The Righteous Gemstones. He also wrote and directed the early McBride comedy The Foot Fist Way as well as Seth Rogen‘s dark comedy Observe and Report. He’s repped by CAA, LBI Entertainment and attorney Carlos K. Goodman.

Anderson is the acclaimed director of Session 9 and The Machinist whose feature credits also include the Halle Berry thriller The Call and the Jon Hamm drama Beirut. On the TV side, he has directed episodes of The Sinner, Fringe, The Killing, The Wire and Boardwalk Empire. He’s repped by UTA, LBI Entertainment and Sloss Eckhouse.

Rodriguez is a veteran TV director whose credits include The Walking Dead, Rescue Me and The Good Wife as well as the recent Apple shows Dickinson, Truth Be Told and Home Before Dark. She’s repped by CAA, Anonymous Content and Hurwitz.

While we probably won’t get a trailer for Peacemaker until after The Suicide Squad hits theaters, the show is expected to debut on HBO Max next January, as the streamer plans to start 2022 with a big, badass bang.