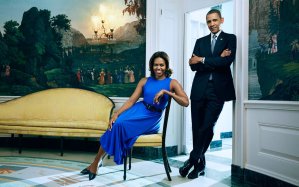 Higher Ground, the production company founded by former First Family Barack and Michelle Obama, is producing a six-part anthology series for Netflix. The project, titled Blackout, will feature six stories of black teenagers finding love during a power outage in New York City. While all six parts will connect through the overarching theme, each will be penned by a different writer, and the project is currently being developed both as a television and film project.

“When the lights go out and people reveal hidden truths, love blossoms, friendships transform, and all possibilities take flight,” Netflix said of the series.

The series has already found its six writers, including Dhonielle Clayton, Tiffany D. Jackson, Nic Stone, Angie Thomas, Ashley Woodfolk, and Nicola Yoon — all known for their experience writing young adult and teen stories. (Clayton co-wrote the Tiny Pretty Things duology recently adapted for Netflix, while Thomas is the author of the critically acclaimed The Hate U Give.) Not all of the stories included in the anthology have been given summaries yet, but among them include the tales of “two boys trapped on the subway come face-to-face with their feelings” and “a pair of best friends stuck in the New York Public Library and surrounded by love stories figure out if there’s one in their future.”

Higher Ground, founded in 2018, has a number of productions under its belt, including the documentary American Factory — for which the company won an Academy Award in 2020 — and a series of Spotify-exclusive podcasts. They currently have several projects in production alongside Blackout, including an adaptation of Fredrick Douglass’s biography, a drama series set in the fashion scene of post-WWII New York City, and a half-hour children’s preschool series titled Listen to Your Vegetables & Eat Your Parents.

No projected release date has been given for Blackout, though it will reunite Higher Ground with Temple Hill, the production team behind the Kevin Hart-led Netflix film Fatherhood. No news has been announced on casting.