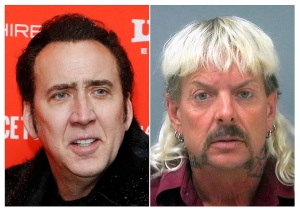 Amazon has reportedly shelved its original series about Joe Exotic, which would have starred Nicolas Cage as the infamous Tiger King. The news comes from Cage himself, who, in speaking to Variety, revealed that he’s no longer attached to the project and that Amazon is apparently dropping the original series.

Joe Exotic became an internet phenomenon after the release of Netflix’s true crime docu-series Tiger King: Murder, Mayhem and Madness. The Tiger King was arrested in 2018 and convicted in 2020 for hiring someone to murder big-cat rights activist Carole Baskin, the biggest nemesis of the tiger collector. The surreal feud between Exotic and Baskin is perfect to be explored by scripted television, so naturally, it didn’t take long for multiple producers to announce their own adaptation of the story. Peacock is currently producing a Carole Baskin-focused series starring Kate McKinnon as the activist, and until now, Amazon was involved in the perfectly-cast Cage project.

As Cage explains it:

“I read two excellent scripts, which I did think were excellent, but I think Amazon ultimately felt that it was material that had become past tense because it took so long for it to come together. They felt at one point that it was lightning in a bottle, but that point has since faded into the distance, and it’s no longer relevant.”

It’s a shame we won’t get to see Cage as Joe Exotic, as the actor was born to give life to a bizarre figure such as the Tiger King. Without Cage attached to the project, there’s little hope for the series to gain enough traction to be bought by other services. However, producers Imagine and CBS Studios are reportedly pitching the project to other outlets.

Cage will come to theaters this Friday, July 16 with Pig, a surprisingly touching story that’s gaining a lot of critical acclaim. The actor is also set to play himself in The Unbearable Weight of Massive Talent, set to be released on April 22, 2022.