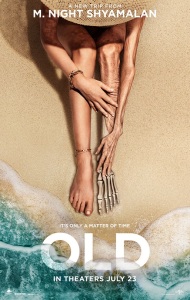 With only one week left before the release of M. Night Shyamalan’s Old, Universal Pictures has released the first clip of the movie. Inspired by the French graphic novel Sandcastle by Pierre Oscar Levy and Frederik Peeters, Old takes place on an island where time moves differently, making people age a lot faster than usual.

In the clip, Ken Leung and Nikki Amuka-Bird meet two children on a beach and try to guess their ages. We can’t see the children’s faces on the clip, but their body shape indicates they are somewhat pre-teens. Leung says the boy before him has eleven years old, but the child replies by stating he’s only six years old. Leung gets confused and thinks the children are playing a prank until the child’s mother comes into the scene and doesn’t recognize her children.

While the time creepiness of the movie was shown in the first trailer, there are probably many more secrets that’ll only be revealed in theaters. We don’t know how faithful Old will be to the graphic novel it takes inspiration from, but Shyamalan usually creates unexpected twists for the end of his movies, for better and for worse. Old also marks the return of Shyamalan, which makes the project even more curious.

Old is currently slated for a theatrical release on July 23. Watch the new teaser below.