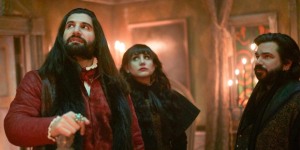 FX has graced us with a quick teaser for season 3 of their hit series, What We Do in the Shadows. The 30-second spot reminds us of the humor so indicative of the series, created by Jemaine Clement, star of the original 2014 film directed by Taika Waititi. Though short, the teaser builds anticipation for the wacky hijinks that can be expected from Nandor the Relentless (Kayvan Novak), Laszlo (Matt Berry), Nadja (Natasia Demetriou), Colin Robinson (Mark Proksch), and the lovable human Guillermo De la Cruz (Harvey Guillén).

The teaser opens with a quick glimpse of the sun and a voiceover from Nandor. The joy from seeing the bright trees and a beautiful woman is short-lived, however, as he quickly walks into a nearby wall, as it’s revealed he is using a virtual reality headset. The 30-second teaser feels like a cold open for one of the episodes, and could easily lead to some hilarity for the characters with virtual reality.

Plot details on the third season are slim, and this teaser doesn’t really provide any illumination (for audiences or Nandor). The second season left some storylines hanging, particularly that of Guillermo, who has revealed his true identity as a relative of Van Helsing. Zombies, necromancers, and witches were all introduced in the second season, as was Laszlo’s double life as Jackie Daytona in the Transylvania-sounding state of Pennsylvania.

What We Do in the Shadows has also developed roles for lots of great guest stars, from Simon the Devious (Nick Kroll) to Topher (Haley Joel Osment), and it was recently revealed on the Smartless podcast that David Cross has a spot in the latest season. Will the lively Tobias Fünke square off with the drab Colin Robinson?

What We Do in the Shadows premiered in March 2019 on FX, and was nominated for two Primetime Emmy Awards for the second season. Aside from directing the original film, Waititi also directed the premiere and finale of the first season, showing his knack for creating new stories and characters in this world. FX and the New Zealand director clearly have a strong working relationship, as he helped to shepherd the upcoming series Reservation Dogs with Sterlin Harjo. That series tells the story of four Indigenous teenagers growing up in rural Oklahoma, and if the trailer is any indication, the network has another hit on their hands.

What We Do in the Shadows will premiere on September 2 on FX, and the next day on FX on Hulu. Watch the teaser below.