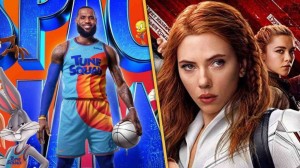 Even with Space Jam: A New Legacy in homes on HBO Max, Warner Bros. proves again that when they shell out on TV spots, they can open the film in movie theaters to a solid number. In this case, it was the best 3-day we’ve seen for a family film during the pandemic, with $31.65M. That’s also the best for Warner Bros. during the Covid-19 era, beating Godzilla vs. Kong‘s big Easter opening of $31.625M by a smidge, and also a record career opening for director Malcolm D. Lee, beating the opening weekend of his Girls Trip by $31.2M.

“It’s the family movie of the summer, and it’s exciting to see audiences come back in big numbers,” said Warner Bros. domestic theatrical distribution chief Jeff Goldstein, who praised the big marketing push by the studio for the Looney Tunes NBA sequel, which included everything from bus wraps, loud social media drumming from star and producer LeBron James, and the pic’s mobile game Looney Tunes World of Mayhem, which has a week’s theme devoted to the sequel.

iSpot shows that Warner Bros spent $15.2M in TV spots on the Looney Tunes live-action animation hybrid movie (since April 3, yielding 993.6M impressions), which is more than what other studios have been spending on family pics during Covid-19, i.e. Sony with Peter Rabbit 2: The Runaway ($8.7M), and Universal with The Boss Baby: Family Business ($13.4M). Warner’s spend here on Space Jam 2 is also less than the $22.5M they forked over for TV ads on In the Heights.

The question is whether and when Warner Bros. can get this movie to cross $100M, given the whole HBO Max factor (the movie plays free to subscribers during its first 28 days, then its second month is strictly in theaters). In a regular pre-pandemic marketplace, without any dynamic windowing strategies, this wouldn’t be a question. It took Warner Bros. 12 weekends to get Godzilla vs. Kong ($31.625M 3-day) past the century mark stateside.

Warners, according to iSpot, bought ads for Space Jam 2 across Nick, ABC, NBC, TNT and Cartoon Network on such shows as SpongeBob SquarePants, NBA basketball, College basketball, America’s Got Talent, and The Loud House.

Social media was huge here for Space Jam 2, with RelishMix reporting that the sequel’s reach across Facebook, Twitter, YouTube, and Instagram was 601.2M, “well above the family animated norms,” thanks to the social power of James (166.2M) and Zendaya (138M) in the mix.

“The quadrangulation of Looney Tunes social network (19.1M) along with HBO Max (growing to 3.3M), Warner Bros. Pictures (56.7M) and the channels for the Space Jam movie (868K) are driving strong activity on international materials — dropping materials across WB YouTube channels to Italy, Spain and the Latin channels. Instagram is most notable at 38% in terms of social platform segment at 234.1M fans for the cast. Key soundtrack artists added to the SMU and activating with song posts, including John Legend (43.7M) on the red carpet at the premiere, plus The Jonas Brothers (25.5M) and Joyner Lucas (7.1M),” reports RelishMix.

James has been posting about the film heavily, and even Dwayne Johnson did so to his 58.8M Facebook fans about a song by his wife Lauren Hashian that’s in the film (James thanked him as well for the shoutout).

Reports RelishMix about the pre-buzz for Space Jam 2: “Conversation ran wildly mixed with throwbacks to the original, crunchy comparisons of LeBron vs Michael Jordan, with hopes that MJ makes a cameo — and dreams of Space Jam 3 based on Kobe or Steph Curry. With a rowdy hoops crowd, fans were expectedly skeptical about the remake, but noting that the target to families and kids — comments on many of the YouTube videos are turned off — while many fans can’t wait to post their reactions on eared materials after they see the film on the day/date big and little screen.”

Yes, yes, similar to Black Widow, even with this result for Space Jam 2, money was left on the table, box office-wise.  This weekend, the Scarlett Johansson standalone MCU origin title dropped -67%, with $26.25M, which reps the steepest second weekend drop for a Disney MCU movie after Ant-Man and the Wasp‘s -62%. So if you’re wondering how Disney+ Premier impacts a Marvel title’s box office, here’s further proof. Note among all Marvel movies, 2003’s The Hulk, which Kevin Feige executive produced for Universal, reps the steepest second weekend domestic drop at -70% for the comic book label’s movies. The 10-day box office for Black Widow stands at $132M.

Note, you cannot comp Black Widow’s second weekend drop here to F9‘s -67% because the latter’s second Sunday fell on July 4th, which is always a down day for moviegoing. Monday July 5th for F9, which was also a recognized holiday stateside, saw that pic’s business pop +15% over Sunday. F9 was released with a theatrical window.

Disney did not report any second weekend updates about Black Widow‘s results on Disney+ Premier. How’s that for transparency?

Warner Bros. has eased the town and exhibition’s fears that they’re only practicing this theatrical-HBO Max-day and date strategy for this year because of the pandemic; that their 2022 and beyond slate will be purely theatrical next year. And at the end of the day, it’s this pandemic (and the continued news of Delta variants and re-masking of L.A. doesn’t help) which continues to give studios like Disney the license to burn down the film distribution model to keep warm. They can trumpet how they made money between a pic’s opening weekend box office and the Disney+ premier PVOD cash. But in addition to shrinking the pie, I hope that Disney CEO Bob Chapek and Disney Media and Entertainment Distribution Chairman Kareem Daniel also realize that they’re losing more than just long-term box office dollars and solid ancillary windows on these-day-and-date releases: Piracy is stealing more money from them faster than they realize, as many sources in the know tell me. And that diminishing of dollars at the box office and windows will hit every downstream business units at Disney quite hard. Wall Street needs to stop sniffing the streaming glue, wake up and realize this recipe for financial disaster.

Fact: Black Widow was the most-pirated movie last week on Torrent Freak, ahead of The Tomorrow War in the No. 2 spot. Many of these piracy sites dress themselves up with images from the film to make it look like they’re legit. The studios go to great lengths while editing their films to encrypt movies and watermark them so they can trace where a pirated copy comes from (whether or not it leaks from inside the studio).

All of those safeguards are blown away in this day-and-date theatrical-streaming era. One industry analytics source informed me that in one study they did for a studio, it showed that these piracy sites were the No. 1 platform for those at home to watch movies, not Disney+ or any other streaming platform. By Disney executing this Disney+ Premier strategy from day one (and Warner’s with their 2021 slate), they’re essentially making pristine free copies available.

By the way, I need to correct myself: Disney doesn’t get 100% of their Disney+ Premier revenue many sources have informed me in the wake of last weekend’s report. On a PVOD release, they have to share ~15% of the revenues with platform providers such as Amazon Firestick, AppleTV+, etc.

So that $60M global PVOD huzzah last weekend is really around an estimated net $51M back to Disney. While it’s better than the 60%/40% rental terms with exhibition, once again, Disney is decimating an ancillary window faster and bound to walk away with less money in the end than they typically would on a regular theatrical release.

The Napster millennials have grown up, Disney, and they’re familiar with getting their goods for free. Is this really a road you want to continue on with future theatrical films? Less box office glow and more piracy results in eroding your brands in the future. Giving into to consumers’ flexible-viewing habits is truly financial foolishness.

iSpot shows that Sony bought ads on ESPN, Telemundo, FX, and Adult Swim for the Adam Robitel-directed sequel, as well as on shows such as NBA basketball, SportsCenter, Family Guy, Mom, and Martin.

“Conversation ran mixed-positive among horror fans who mulled storyline thoughts about the subway with many who love it and ‘puzzle masters’ who are dissecting the trailer,” said RelishMix about the low wattage pre-buzz from the pic.

One highlight of the sequel’s marketing push: the studio reconstructed the pic’s subway escape room in Hollywood:

Focus Features’ Morgan Neville’s documentary Roadrunner: A Film About Anthony Bourdain rang up $1.9M in 8th place at 925 theaters from 189 DMAs, repping the top opening for a specialty movie and top opening for a docu this year. The pic out-grossed the weekend debuts of Roadside Attractions’ The Courier (opened at $1.885M) and Zola (opened at $1.2mil) and grossed more than three times what Questlove’s Summer of Soul made in its opening weekend of $650k. Roadrunner is also the top opening of Oscar winner Neville’s career.

NEON’s Nicolas Cage thriller Pig slotted 10th with $945K at 552 locations for a $1,7K theater average. The pic’s top ten theaters I’m told out of its top 20 came from arthouses, which is a promising sign that the sector is on the rebound after weathering the pandemic. Top cities were NY, LA, Chicago, San Francisco and Portland.