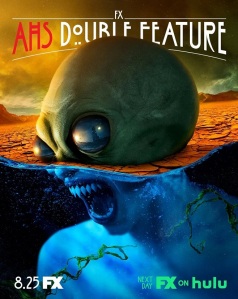 American Horror Story is returning for a gruesome Double Feature. FX premiered the official first teaser for the anthology show’s tenth season today, featuring a ballet of horrific proportions and visuals sure to keep fans wide awake at night. The new season is set to premiere on FX on August 25, after being delayed multiple times due to the COVID-19 pandemic.

While the teaser contains no actual footage from the show, it does tell audiences that “two worlds will collide” for “twice the terror” of a normal season. A typical Area 51-style alien dances with a Nosferatu-looking monster, with visuals of the ocean, lighthouses, and — as usual — buckets and buckets of blood interspersed between them. These visuals match that of the show’s promotional poster released in June, of a female creature kissing an alien with a black pill resting on her tongue.

According to the teaser, the season will be split into two parts: Red Tide, which takes place “by the sea,” and Death Valley, which takes place “by the sand.” Based on those descriptions and the humanoid creatures in the teaser, is there a possibility we may see creator Ryan Murphy’s take on sirens, the man-eating villains every sailor fears? Or will we see something else — something more sinister, from deeper depths of the ocean? Only time will tell.

American Horror Story: Double Feature stars a number of returning AHS veterans, including Billie Lourd, Sarah Paulson, Lily Rabe, and Evan Peters, among others, while new members Neal McDonough and Macaulay Culkin will also join the cast. The first episode of the season will be titled “Cape Fear”, directed by John J. Gray and written by Murphy and Brad Falchuk.

American Horror Story: Double Feature will premiere on FX on August 25, with episodes available on FX on Hulu the next day. Check out the brand new teaser below: