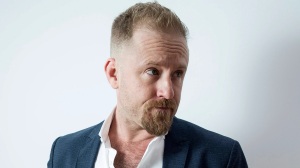 The period piece, which cost Apple approximately $120 million, tells the harrowing but ultimately triumphant true story of Peter (Smith), an enslaved man who fled a Louisiana plantation following a brutal whipping by one of its overseers. As he traveled north to join the Union Army, Peter was forced to rely on his wits, his unwavering faith, and his deep love for his family while evading hunters, their vicious bloodhounds, and the treacherous swamps of Louisiana en route to freedom.

When Peter finally showed Army doctors his mutilated back during a medical examination, they took photos of his scars, and one photo that became known as “The Scourged Back” was published around the world, effectively going “viral” all the way back in 1863. The photo was held up as proof of the cruelty of slavery in America and it solidified the abolitionist cause, prompting many free Blacks to join the Union Army in order to fight racists in the South.

Foster will play Fassel, a man who doggedly pursues any enslaved person who attempts to flee to freedom, including Peter. Bingwa has been cast as Peter’s beloved wife, Dodienne, while Owuor will play an enslaved man named Gordon who works at the same camp as Peter. Finally, Shakir will play Cailloux, a free Black man who serves in the Union Army.

William N. Collage wrote the script for Emancipation, which is described as being closer in tone to Apocalypto and The Revenant than 12 Years a Slave, as it’s less a traditional slavery drama than an action-packed survival tale. Smith is producing with his Westbrook Studios partners James Lassiter and Jon Mone, as well as Joey McFarland of McFarland Entertainment, Todd Black of Escape Artists, and Apple Studios. Fuqua will executive produce under his Fuqua Films banner along with Cliff Roberts. Production started two weeks ago but was recently put on hold temporarily following a positive COVID-19 test, though the shut down isn’t expected to last long.

Though Foster hasn’t been seen on the big screen since the 2018 indies Leave No Trace and Galveston, he has been busy shooting several projects including Barry Levinson‘s boxing drama The Survivor, Adam Sandler‘s basketball movie Hustle, and Violence of Action, which reunites Foster with his Hell or High Water co-star Chris Pine. From Alpha Dog to The Messenger to Lone Survivor, Foster has long impressed me with his intensity and I can only imagine how that fiery energy will be put to use in Emancipation, as I’m imagining something along the lines of Michael Fassbender‘s fearsome turn in 12 Years a Slave. Foster is represented by UTA and attorney Patti C. Felker.