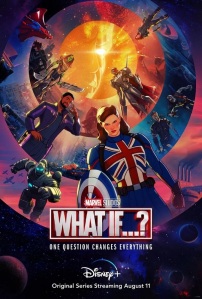 Marvel‘s Twitter account just released a new clip of the upcoming What If. . .? series. This clip shows Captain Peggy Carter deflecting a rocket and interacting with Steve Rogers, who’s apparently a robot in this strange alternate reality. Interesting choice to make, but considering how crazy the characters’ counterparts are (including some characters being zombies, and Spider-Man being a zombie hunter) Steve being a robot is pretty tame.

What If. . .? is an animated anthology series that explores what would happen if major moments in the Marvel Cinematic Universe played out with different characters, like Peggy Carter taking the Super-Soldier Formula instead of Steve Rogers. The show also has a huge cast of characters, more so than Infinity War and Endgame.

The first season of What If…? is scheduled to premiere on August 11 on Disney +, and will consist of nine episodes. Here is the clip and synopsis for What If. . .?

Following the creation of the multiverse at the end of Loki’s first season finale, What If…? explores the various branching timelines of that multiverse in which major moments from the Marvel Cinematic Universe films occur differently.