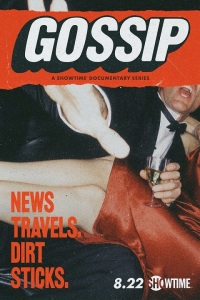 Gossip is a look into the world of tabloid journalism and features the Queen of Gossip herself, Cindy Adams, and now we have our first look at the trailer for the Showtime docuseries. From executive producers Brian Grazer and Ron Howard, the series is directed by Jenny Carchman (The Fourth Estate) and clearly shows the rise of the gossip column to the destruction that it has caused up until today. The four-part docuseries premieres August 22 at 8 p.m. EST.

From the fame that Donald Trump so desperately craved to the tabloids who would not leave Britney Spears alone, it seems as if everything (much like gossip) is off-limits in the docuseries, and it’s going to be an interesting breakdown of tabloid journalism, featuring interviews with such talking heads as Perez Hilton, Maury Povich and more.

What’s interesting about the trailer, at least, is that Adams doesn’t seem to mind the part she played in this all, even when the trailer clearly indicates that the gossip mill is how we ended up with Trump in power. But the series seems to tackle everything beyond that — from the need to sell headlines to our relationship with gossip magazines today.

Carchman is also known for her work as a producer and co-director on the Emmy-nominated The Family Business: Trump and Taxes, as well as We Are Witnesses, Enlighten Us, and One Nation Under Dog. Sara Bernstein, Justin Wilkes, and Troy Searer also serve as executive producers alongside Grazer and Howard.

Gossip will premiere as a four-part docuseries on August 22 at 8 p.m. EST on Showtime. Check out the trailer below:

Here’s the official synopsis for Gossip:

GOSSIP delves into the world of tabloid journalism, which rose to popularity in New York City in the late ’70s and took the world by storm. The city’s most prominent gossip columnists – Liz Smith, George Rush, Richard Johnson and notably Queen of Gossip Cindy Adams – built their careers reporting on and creating icons – even sometimes becoming celebrities themselves. Through the popularity of gossip, Adams and her fellow writers, over time, helped reshape journalism and set the agenda for who becomes famous for the decades to come.

Each episode distinctly dissects and dishes on how gossip and its stewards evolved across a different decade, reflecting on the biggest scoops and scandals — from Donald Trump’s divorce to Paris Hilton — and examining its double-edge sword: Gossip can inspire communal kinship, but it can be weaponized to take down anyone in its footpath.