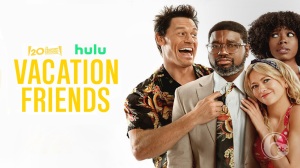 Synopsis – A couple meets up with another couple while on vacation in Mexico, but their friendship takes an awkward turn when they get back home.

My Take – I am not sure if anyone has noticed but there sure has been a constant drop in the number of holiday based comedy releases in the past years, probably because the genre that usually used to go down easy became a bit hard to stomach with their increasing absurd set ups and pairs. While it might be cruel to expect a release of such kind considering the current state of world, especially watching people dine and wildly drink their way through foreign countries without any safety precautions.

However, this year’s ‘Barb and Star Go to Vista Del Mar’ proved that if the film is made well and unreal enough to be palatable, the results can be hilariously accepting. Similarly 20th Century’s new R-rated raunchy comedy which debuted exclusively on Hulu after many years in the works, is also undeniably absurd yet thankfully comes together to deliver quite a fun time.

Without a doubt, there’s nothing especially revelatory about the film, and one can easily guess every character and story beat, but director Clay Tarver (Silicon Valley) and his co-writers Tom Mullen, Tim Mullen, Jonathan Goldstein, and John Francis Daley keeps the laughs coming from start to finish, without missing many beats.

It also helps that Lil Rel Howery and John Cena share solid comedic chemistry that breathes a bit of liveliness into the film that manages to perch itself atop the teeter without too much fumbling and stumbling. The film is enjoyable in a way that doesn’t make you think much and reminds us why we used to enjoy lighthearted affairs about chaotic vacations and destination weddings to pleasantly pass the time.

The story follows Marcus (Lil Rel Howery), an uptight owner of a construction business, who has big plans for his Mexican vacation getaway with his girlfriend, Emily (Yvonne Orji). After years of dating and very elaborate planning, Marcus plans to wrap things up with a proposal. However, despite his meticulous planning, things go wrong from the start. That is until they are invited by fellow vacationers Ron (John Cena) and Kyla (Meredith Hagner) to share their presidential suite after being moved to tears by Marcus’ proposal in the reception of their hotel.

Although every red flag Marcus can find is raising, as Ron and Kyla are very loud, obnoxious and make more than a few questionable decisions on behalf of their new friends, but Emily’s up for cutting loose and having a memorable getaway. Hence over the next seven days the foursome remain inseparable and get into some high level shenanigans.

But when it’s time to head back home, Marcus and Emily are content to get back to their normal lives, and likely never see Ron and Kyla again. But Ron and Kyla don’t get the message and seven months later they show up announced for Marcus and Emily’s fancy wedding weekend.

It’s a classic comedy set-up and director Clay Tarver drawing on his experience from HBO‘s Silicon Valley series, gives audiences that same ensemble-led fun while channeling the Rated-R vibe of others in this genre like The Hangover films and Bridesmaids (2011).

However, what makes all the loud behavior, hi-jinks and generic conflict construction work is its undercurrent of sweetness. Strip away the cocaine-loving, boundary shattering, straight jacket-worthy behavior of Ron and Kyla and you get two wounded people doing everything they can to make friends and spread kindness.

Especially in the second half where the jokes take a backseat to the friendship arc within their group. The comedy isn’t entirely gone, but it adds a sentimental quality to the story. As their two worlds collide, Marcus and Emily become increasingly panicked of potential drama looming underneath the surface. It’s a necessary counterweight to the foul-mouthed lunacy that the film leans on throughout.

Sure, it’s a silly R-rated raunchy comedy in which we get both testicle and poop jokes. However, the theme of friendship remains front and center. It also helps that the cast manages to elevate some of the jokes with quick-witted delivery and priceless facial reactions.

After starring in two action fueled film, F9 and The Suicide Squad, this summer, John Cena closes out his epic summer with his best performance yet. Since coming off his wrestling career, Cena has proven time and again that he has great comedic timing and here he is allowed to shed all sense of inhibition as opposed to playing the bland straight action man. He lands both the comedic beats and the sincere moments very well. Cena is balanced out perfectly with Lil Rel Howery‘s uptight, high-strung Marcus. Howery pauses and reacts at the perfect times to really drive home the hilarity happening on screen. It is this relationship between Marcus and Ron that really anchors the story and provides the foundation for the teachable moments.

Meredith Hagner perfects her brand of slightly ditzy comedy with an edge, while Yvonne Orji hits the comedic timing flawlessly in such a way that reiterates that Emily has a wild side hidden well underneath that poised exterior. In supporting roles, Robert Wisdom, Lynn Whitfield, and Andrew Bachelor are delightful too. On the whole, ‘Vacation Friends’ is a decently enjoyable comedy with enough laugh out loud moments and a surprising amount of heart.