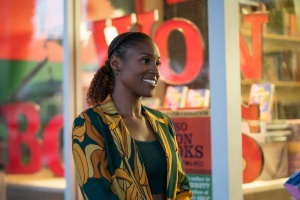 HBO has announced the return of Insecure for its fifth and final season, premiering on October 24. Along with this announcement came a teaser trailer, showing lead actress Issa Rae (not to be confused with her character named Issa Dee) taking some time to reflect on the events that have unfolded in the series so far.

In the teaser, Issa stands in front of a mirror, thinking back to how simple her life used to be and how all she wants is “to be drama-free and happy.” This sentiment gives way to a more valuable look at Issa’s headspace and the difficulty of putting on a strong face. “I keep fronting everybody like I’m not scared about what’s next for me, but I’m terrified. So, what am I supposed to do now?” She is answered by her reflection telling her that “Maybe there’s a little voice in your head that’s telling you that you’re not done.” The trailer ends with this playful interaction between the two Issas, a tinge of optimism in the air.

Along with Rae, the Emmy-winning comedy series’ swansong will also see the return of series regulars Yvonne Orji, Jay Ellis, Natasha Rothwell, Amanda Seales, and Courtney Taylor. The official synopsis for the final season lets fans know that the series will continue “to follow our favorite characters as they evaluate their relationships, both new and old, in an effort to figure out who and what comes with them in this next phase of their lives.” The series began in 2016 and follows Issa and her friends through their trials and tribulations in both their personal and professional lives.

The first four seasons of the critically acclaimed show can be streamed in full on HBO Max and the final season begins airing on October 24. Watch the teaser trailer for Insecure Season 5 below.