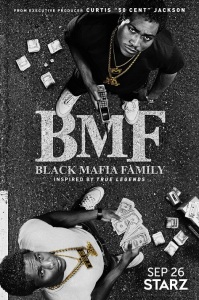 Four days after its first season premiered, Starz has already given the greenlight to a second season of BMF, an original series that hails from executive producer Curtis “50 Cent” Jackson. The first episode of Season 1 debuted as the #1 premiere on the Starz app, as well as one of the most highly engaged series premieres ever on the premium network.

BMF (which stands for Black Mafia Family) tells the true story of “Big Meech,” aka Demetrius Flenory, one of two brothers who started a powerful mafia family in southwest Detroit. On the series, Flenory is played by his real-life son, Demetrius “Lil Meech” Flenory Jr.

“Curtis ’50 Cent’ Jackson continues to find and cultivate stories like BMF that are culturally relevant, bringing the network important untold stories that are incredibly diverse both in front of and behind the camera,” said Jeffrey Hirsch, President and CEO of STARZ, in an official statement. “Following such a strong debut, we’re excited to see what Curtis, Randy and the award-worthy cast deliver in the second season.”

Season 1 of BMF premieres new episodes every Sunday on Starz. Season 2 has not yet confirmed a release date.

Here’s the official synopsis for BMF:

BMF is inspired by the true story of two brothers who rose from the decaying streets of southwest Detroit in the late 1980s and gave birth to one of the most influential crime families in this country. Demetrius “Big Meech” Flenory’s charismatic leadership, Terry “Southwest T” Flenory’s business acumen and the fraternal partnership’s vision beyond the drug trade and into the world of hip-hop would render the brothers iconic on a global level. Their unwavering belief in family loyalty would be the cornerstone of their partnership and the crux of their eventual estrangement. This is a story about love, kinship and capitalism in the pursuit of the American dream.