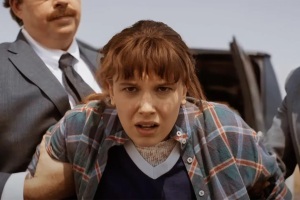 Stranger Things fans may even have more content to look forward to, because it seems as if Netflix CEO Ted Sarandos is ready to expand the world that the Duffer Brothers created. According to Deadline, Sarandos revealed that Stranger Things is “a franchise being born” and hinted at the possibility of “spinoffs” in the works. The fourth season of the hit series, which recently debuted a new trailer as part of Netflix‘s TUDUM fan event last weekend, is currently set to premiere on the streamer in 2022.

Deadline also reports that there have been conversations surrounding a potential Eleven spinoff starring Millie Bobby Brown, which would further extend the Stranger Things universe but also fall under the purview of her own separate deal with Netflix. Given that Season 4 is already primed to take fans out of the comforts of Hawkins, Indiana and into several new settings, it seems that there are already steps being taken to expand the world of the show with some serious globetrotting.

In Collider‘s own interview with Shawn Levy, the show’s executive producer gave further evidence to support the fact that there are definitely conversations happening around any potential Stranger Things spinoffs, though nothing concrete has happened:

“What’s been made clear is there is an interest and a real voracious appetite for any offshoot, any other iteration format or extension of the franchise, the characters, the mythology. Certainly those conversations are hardly evolved, but they’re also not non-existent.”