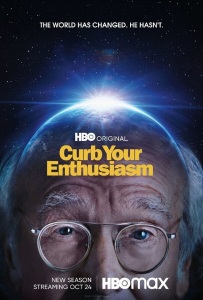 Everyone’s favorite cringe comedy is back, as HBO’s Curb Your Enthusiasm has released its Season 11 trailer showcasing Larry David and all his dark, sarcastic humor. “I hate people individually, but I love mankind” David claims in the first look at the upcoming season.

Curb Your Enthusiasm was created by David, who plays a fictionalized version of himself as a retired television writer and producer in his day-to-day life. The show often features guest stars, who also play fictionalized versions of themselves. The series utilizes improv comedy, with actors being given scene outlines instead of scripts creating a spontaneous narrative. David’s comedy series has been nominated for 47 Primetime Emmy Awards over its 20-year run, winning in 2003 and 2012 for Outstanding Directing for a Comedy Series and Outstanding Single-Camera Picture Editing for a Comedy Series, respectively.

The trailer features David engaging in sarcastic toasts, dealing with traffic, and being called repugnant. Though the new season was filmed during the pandemic and following associated guidelines, showrunner Jeff Schaffer told The Hollywood Reporter that the show would take place in a post-COVID-19 world.

“We had to make the decision about what era we were writing — before, during or after COVID — and the real factor was when we would be premiering. We figured we would be coming out in the fall of 2021 and we didn’t want what we were writing in March of 2020 to be so timely that it would feel dated more than a year later.

Curb Your Enthusiasm returns October 24 on HBO, airing every Sunday, and will be available to stream on HBO Max. Watch the fun-filled trailer released by HBO below.