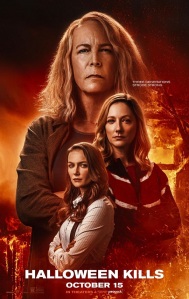 Typically, horror movies fall apart on a Saturday night, especially ones with bad reviews and lackluster audience exits. But Universal/Blumhouse/Miramax’s Halloween Kills kept it together, even with a day-and-date Peacock component.

The David Gordon Green-directed sequel, the 12th in the franchise, kept on course for a $50.35M 3-day, slightly higher than what we saw yesterday morning off a $17.2M Saturday, -25% from Friday. That’s a better Friday-to-Saturday hold, percent-wise, than previous Blumhouse October horror pics Paranormal Activity 3 and Paranormal Activity 2, both -35%. Also, Halloween Kills’ Saturday beats Paranormal Activity 2’s Saturday of $13M.

From PostTrak exits, the majority of respondents at 38% said the main reason why they went to the sequel was because it was part of a franchise they liked.

Halloween Kills ties with Jackass 3D as the ninth-best opening at the domestic box office for October, and the third-best for a horror film during the month, after Halloween two years ago ($76.2M) and 2011’s Paranormal Activity 3 ($52.5M). The pic is also the eighth Blumhouse title to open north of $40M.

Beamed Universal Domestic Distribution Chief Jim Orr, “The debut of Halloween Kills this weekend is a further reinforcement that audiences are eager to be in theaters to truly experience the energy created by what becomes a communal event, especially for this genre and this franchise. Our amazing director, David Gordon Green, and our lead, Jamie Lee Curtis, crafted an incredibly terrifying continuation of this franchise that our audience enthusiastically embraced this weekend.”

Before the streamer-heads take a victory lap, and no doubt Comcast NBCUniversal brass will do so for the sequel when earnings hit on the 28th of this month, this is clearly and vibrantly a win for the box office and movie theaters.

A majority of the streamers outside of Netflix are silent about their viewership, and aim to get headlines with anecdotal exclamations. However, if there’s a result here on Peacock for Halloween Kills in terms of the hard number of paid subscribers gained or the millions that watched, then the media conglom should trumpet that to the sky. Anything less and anecdotal, “Oh, it was the best we’ve seen” is unacceptable. It takes a lot of nerve, muscle, and tact to release a theatrical movie in a marketplace that’s looking to repair itself, and these movies every weekend get looked at under a microscope.

While it’s been declared that Boss Baby 2 worked, there’s been zero data from the conglom to support that. Meanwhile, a majority of what’s on streaming gets away without any scrutiny. Not really fair, but more than that, if I’m a content creator or any guild member associated with the movie, I deserve to know what the fruits are from the blood, sweat, and tears that has been poured into a production.

Again, Halloween Kills going to Peacock wasn’t about any concern for the pandemic and cautious audiences. Moviegoers, especially the 18-34 sect, have already demonstrated that they’re willing to come out to cinemas. Sending the sequel to Peacock was all about Peacock. All we know is that 52M subscribers are activated on Peacock, meaning that any Comcast cable household has access to the ad-fueled, subscription-free tier of the service.

Most recent numbers for activated monthly Peacock users were at 14M, and per MoffetNathanson in our previous update, the number of paid subs on the service (who at $4.99 would get access to Halloween Kills) are significantly smaller, according to data from earlier this year. Best advice for Peacock: Get Battlestar Galactica off the ground ASAP to pull in young subs, and get repeat business instead of burning down the theatrical slate.

Wall Street should be keen here to recognize the box office win for Halloween Kills over any anecdotal, non-numerical claims made on the Peacock side: This is the third back-to-back weekend during the pandemic where all movies have grossed over $100M. This past weekend looks to touch $112M this weekend, +3% from last weekend when No Time to Die led the box office.

The campaign for Halloween Kills kicked off with the official first full trailer launch on June 24, and garnered 60M views, more than 1,000 editorial posts, and generated trending topics on Twitter, Facebook, and YouTube, per Universal. Curtis received the Golden Lion Award at the Venice Film Festival, where the pic premiered. The actress also hosted the launch of Universal Pictures’ TikTok account, which is featuring only content from Halloween Kills throughout this month. Her first post racked up more than 350K views in just three days.

There was also an innovative new audio feature on Twitter to tease the final trailer, a “Face the Shape” contest across Instagram and TikTok that allowed fans the chance to win a trip to L.A. and be killed by Michael Myers. Additional social and digital activations include a “Knifed” GIPHY program, a Facebook/Instagram Messenger MovieMate viewing of 2018’s Halloween, which allows users watch the film and receive interactive messages throughout, including BTS stills, trivia, and GIFS as they watch, along with a partnership with Snap for a full three-dimensional scale Michael Myers Snap World lens. The lens was featured on NBC’s Football Night In America.

Who should doubt 007? The global haul for No Time to Die via UAR and Universal stands at $447.5M through three weekends. That’s higher than Disney/Marvel’s worldwide take for Black Widow at $379.3M, also ahead of those studios’ Shang-Chi, which has $414.3M WW, and Bond is about to take over Warner Bros./Legendary’s Godzilla vs. Kong at $467.8M. Imax reports that Bond 25’s second weekend stateside grossed $3M. There were strong weekend holds across much of Europe, particularly Germany (-18%), Austria (-13%), Sweden (+2%), Finland (-20%), and Netherlands (-7%), taking the Imax totals to $19.3M abroad and a global tally of $31.6M. Of that $12.3M is from the pic’s domestic take. I also understand that Canada had a better hold than the U.S. on No Time to Die; Universal is handling the movie in the Great White North.