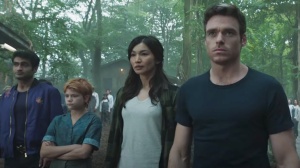 Disney was able to keep Eternals intact throughout the weekend hitting a $71M opening amid mediocre audience exits, and the worst reviews of all-time for an MCU title. But know that when this film first landed on tracking four weeks ago, many had it in the $80M-$85M three-day range. Of those attending in the U.S., 46% told Screen Engine/Comscore’s PostTrak that they went to Eternals because it’s part of a franchise they love, while 44% said the genre/type of movie, 32% the storyline and 28% because of the ensemble cast.

Eternals global start is just under that of the worldwide opening of Guardians of the Galaxy ($164M) and Antman and The Wasp ($167M).

Realize that even though an event movie may put up some business, that internally studios digest all the poor critical and fan reactions, especially coming off of a superhero, possible franchise property. There’s certain to be some Monday morning quarterbacking here at Disney with Eternals, but as one film finance source told me yesterday, it’s not the end of the world here for MCU. It stands to reason that eventually after a great streak, the studio would churn out a bad picture. One in 26 isn’t a horrible record. If it was one in five pictures, then there would be reason to be concerned about Marvel, and as far as their competitor DC goes, they’re still trying to get their house together in the wake of Zack Snyder’s Batman v. Superman (that said, they did see their first $1 billion grossing DC movie with Aquaman).

The upside for Disney here with Eternals is that the film remains largely unopposed until Disney’s own animated film Encanto arrives for Thanksgiving. There’s a great warm buzz for Sony’s Ghostbusters: Afterlife but distribute sources believe the movie will be a slow burn. Even if Disney gets Eternals on Disney+ by Christmas, having both Eternals and Sony/Disney/Marvel’s Spider-Man: No Way Home in the marketplace on Dec. 17 will deliver lagniappe at the box office for the former, similar to when Captain Marvel received carryover business when Avengers: Endgame was in release at the same time at the end of April 2019. Of those who saw Eternals this weekend, 26% of them told PostTrak they’d see it again in a theater, while 16% will watch it for free on BitTorrent or a piracy site, while 11% will buy it on Blu-Ray.

You can’t blame Disney’s marketing for the tepid performance here on Eternals. Sorry, but the trailers at least provided an understanding of Eternals, good; Deviants; bad; before anyone tried to figure out this complex superhero gods story. The first trailer dropped at the end of May scored the most global views in a 24 hour period for a Marvel movie trailer during the pandemic at 77M. On PostTrak, those moviegoers who saw Eternals said the most effective advertising was the pic’s YouTube trailer (22%), in theater trailer (14%), and online trailers (13%). Advance ticket presales were the biggest for AMC of the year, and also bested that of Shang-Chi and Black Widow. The studio first introduced the actors and their characters at Disney 2019 D23. Disney had enough confidence in Eternals to fearlessly world premiere it and screen it to the press at least three weeks ahead of release.

In the wake of this, RelishMix noticed that before Eternals’ opening, “conversation ran mixed with MCU die-hards…with low critical reviews on Rotten Tomatoes, some fans were vexed and others certain that Eternals would be a masterpiece.”

EntTelligence box office analytics clocked 5.5M people taking in the Chloe Zhao directed movie this past weekend with 21.75% of those having seen the film in premium large format. Compared to the first days of Venom: Let There Be Carnage, that movie had an average of 25% seeing the pic in large format. Venom 2 had more showtimes per location in PLF next to Eternals. As we told you previously, Eternals‘ Thursday night for PLF only allowed two showings per location vs. Venom 2 which had four showings per location due to its shorter run time. Nonetheless, attendance for Eternals was consistent throughout the day with 50% of those attending arriving before 6PM.  Eternals’ strongest play was in the West and South with big cities pulling in the money. Top five markets were LA, NYC, San Francisco, Dallas and Chicago. Imax, PLF, 3D through Saturday were driving 37% of ticket sales.

Sixty-one percent of those seeing the movie bought their ticket day of, 12% the day before, while 26% bought it either in the last week or earlier.

Among some of the marketing stunts for Eternals, there was an augmented reality experience with star Lia McHugh that was created utilizing the score created by Ramin Djawadi where the film VFX Supervisors helped craft the experience along with ILM’s involvement.

Over 20 pieces of original content were created in the global push, i.e. “Introducing the Eternals” (Oct. 20) whereby the cast explains each of their character’s powers and role to help contextualize the film and the Eternals’ role in the MCU.  “Visionary” (Oct. 21) in which Marvel Boss Kevin Feige explains how the next chapter of the MCU needed to include filmmaker Zhao. She elaborates her vision and Brian Tyree Henry, Lauren Ridloff, Angelina Jolie, Kumail Nanjiani and Gemma Chan discussing the film. “In Kingo’s Words” (Oct 25) where Nanjiani humorously explained the storyline focusing on Kingo’s perspective, which is challenged by other cast members. Additional content included talent greetings for special screenings for the Gold House #OneOpen Screening in NYC, 25 National Fan Event Screenings, exclusive content for NCM and exhibitor partners, a “Stare-Off” Content with Jolie and more.

As we told you, there was a $100M promotional partner campaign with Lexus, McDonald’s, Geico and more.

A great breakthrough for Eternals in regards to cinemagoing: it was the first ever open caption film release created for deaf and hard of hearing communities. The movie stars deaf actress Lauren Ridloff who plays Makkari. The movie had expanded open caption show times along with marketing and social support from exhibition partners. All social and audio visual marketing creative was captioned for a fully accessible experience. Disney held open caption publicity screenings across key markets with influencers and an introduction to the film by Ridloff. There was content creation with Black American Sign Language influencers nationwide, and there was an open caption screening for Gallaudet’s Center Of Black and Deaf Studies (Washington DC) with taped Q & A with Ridloff and students.

What of Netflix’s Red Notice? While rival distributors can’t see ticket sales for the film in Comscore, there are other ways and means of figuring out what this Dwayne Johnson-Gal Gadot-Ryan Reynolds $200M action film grossed at 750 locations. We’re hearing the movie had a great Saturday night (for a Netflix movie) and is approaching $1.25M in monitored theaters. Other sources have floated a $1.5M three-day to me, which is possible, but the lower number is more reasonable. While Netflix doesn’t report their box office numbers, here’s one nice thing exhibition can say about them: They provide excellent rental terms. In doing that, Netflix leaves it to exhibition to sing for their supper, and promote the movie at their venues to drive business. Some dine-in chains are elated with the bucks they can pump out of a Netflix movie. Still, as we said, the bigger circuits would have starved for this event film release in the next few weeks. I hear the reason why the pic is on a one week theatrical window (versus the standard three week window for Netflix awards bait titles) is because it was finished late, and pick-up shots were needed.

NEON is reporting $2.1M at 996 theaters for its Kristen Stewart Princess Diana pic Spencerwhich posted $783K Friday, $780K Saturday and is expected to ring in $585K today. Despite the solid hold here by Searchlight’s The French Dispatch being even in its third weekend with its previous session thanks to an additional 417 theaters (with a current count of 1,205), I hear business is largely being driven for the Wes Anderson movie by 150 core runs. Essentially, despite the flood of arthouse product, the sector is still waiting to fully awaken during the pandemic. Perhaps, down the road, when we finally don’t have to wear masks in public.