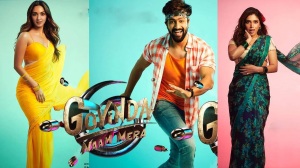 Bollywood filmmaker Karan Johar has announced his next production titled Govinda Naam Mera. Starring Vicky Kaushal in the leading role, the first look was unveiled on November 12, 2021. The film will release on June 10, 2022.

Presenting the chaotic and entertaining first look, Karan Johar wrote, “Meet Govinda Waghmare! Heart of gold and dance moves are bold! Presenting #GovindaNaamMera, where there will be unlimited laughter, confusion and chaos! In cinemas on 10th June, 2022.”

Sharing first look Bhumi Pednekar, Karan wrote, “Mrs.Waghmare is a force to be reckoned with! Meet her in #GovindaNaamMera, in cinemas on 10th June, 2022.”

Written and directed by Shashank Khaitan, the film’s name has been reportedly changed from Mr. Lele to Govinda Naam Mera. It also stars Kiara Advani and Bhumi Pednekar. The film is produced by Hiroo Johar, Karan Johar, Apoorva Mehta, and Shashank Khaitan.