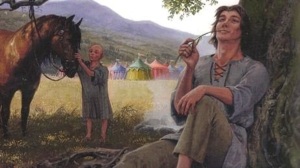 Steve Conrad has been tapped as the writer and executive producer for the new Game of Thrones prequel series Dunk & Egg, which is currently in the works with HBO Max. Looks like Thrones fans will be able to follow more than just the early rise of the Targaryen family in the upcoming HBO series House of the Dragon.

The series is based on George R.R. Martin’s fantasy novellas of the same name. Martin has published three of these novellas, which take place in the world of A Song of Ice and Fire but are set long before the events of that series. The novellas follow the adventures of Dunk (Ser Duncan the Tall) and Egg (the future king Aegon V. Targaryen), some 90 years before the timeline of A Song of Ice and Fire. The three novellas in the series to date are The Hedge Knight (1998), The Sworn Sword (2003), and The Mystery Knight (2010).

Conrad’s writing career in both film and television is jam-packed, with films such as The Pursuit of Happyness and shows such as Prime Video’s Patriot under his belt. He also has directorial credits for these projects as well as films such as The Weather Man.

This series is one of the several new live-action Game of Thrones projects that have been earmarked for development by HBO over the last year, including a direct prequel and one revolving around a character who will first appear in the upcoming House of the Dragon, Lord Corlys Velaryon, also known as the Sea Snake. Alongside these new live-action shows, several animated ideas have also been considered for HBO Max, though these ideas have not been confirmed by either the network or streamer.

Conrad’s addition to this show means that Game of Thrones fans will soon have a prequel that will give more insight into the vast world of Westeros as these amazing adventurers arrive on our screens to join the dragons of House Targaryen. Meanwhile, House of the Dragon, the next series set in the Martin Cinematic Universe, is currently slated for release sometime in 2022.