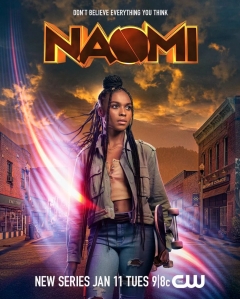 In the heels of the first-look images unveiled yesterday, The CW released the first trailer for Naomi, an upcoming series set to premiere in early January. The series is set to follow title character Naomi (Kaci Walfall), an inquisitive girl who starts to question if superheroes are real and ends up discovering much more than she expected.

The trailer is introduced by Walfall herself and provides a sneak peek of what we can expect to see when Naomi premieres next month. It reveals Naomi’s first “encounter” with a blur that is probably Superman, which is the subject of an investigative blog she keeps, and Naomi getting desperate as her powers start to manifest. She then becomes a target and is quickly localized by Akira (Stephanie March) and Zumbado (Cranston Johnson), who decide they can “use her”.

The trailer also confirms Dee’s (Alexander Wraith) role as mentor and protector of Naomi. The actor had already been revealed in images, and his origin – he’s from the planet Thanagar, home of DC’s Hawkman and Hawkgirl – already has fans speculating that Naomi will soon be another welcome entry into the Arrowverse, which recently “lost” a member as Supergirl came to an end in early November.

First introduced in the comics in 2019’s Naomi: Season One, Naomi became part of the Young Justice at the end of her arc. Massive fan popularity elevated the relevance of the character to the point that she ended up becoming a member of the Justice League shortly after being created. Once there, she got the appropriate codename “Powerhouse”. Naomi was created by Brian Michael Bendis.

The CW premieres Naomi on January 11. You can watch the trailer below: