Scott Derrickson‘s horror thriller The Black Phone has just gone retro in a new creepy poster. Retro posters are extremely on-trend right now, and this new poster perfectly evokes those feelings of classic 1970s and 1980s horror films. The poster features lead actor Ethan Hawke with his sinister stone mask. The devilish mask is particularly unsettling with its wide, almost painful-looking smile. The image of Hawke appears to match a shot from the trailer where his character is taunting his latest victim. He holds his hands up to highlight the horrific warped version of his face presented on the mask. On the poster, blood drips from his hands streaking down to fill out the title of the film.

The poster also features a black rotary phone that doesn’t quite match the one in the trailer which hangs on the wall, but it gets the job done. Here we also get more emphasis on the film’s tagline than we’ve had in previous posters. In a retro font similar to that of the original Halloween poster, we’re told “Never talk to strangers.” Along the bottom of the poster, we also get the names of other notable stars in the Jason Blum produced film including Mason Thames, Madeleine McGraw, Jeremy Davies, and James Ransome.

Derrickson is returning back to his horror roots with The Black Phone, having previously written and directed films like The Exorcism of Emily Rose, Sinister, and Deliver Us from Evil, prior to delivering Marvel‘s Doctor Strange in 2016. The Black Phone follows 13-year old Finney Shaw (Thames) after he’s abducted by an elusive child killer known as The Grabber (Hawke). Finney’s sister Gwen (McGraw) begins having dreams about him and tries to work with local law enforcement to save her brother. Meanwhile, in captivity, Finney begins receiving phone calls from The Grabber’s previous victims whose spirits are intent on helping him escape. 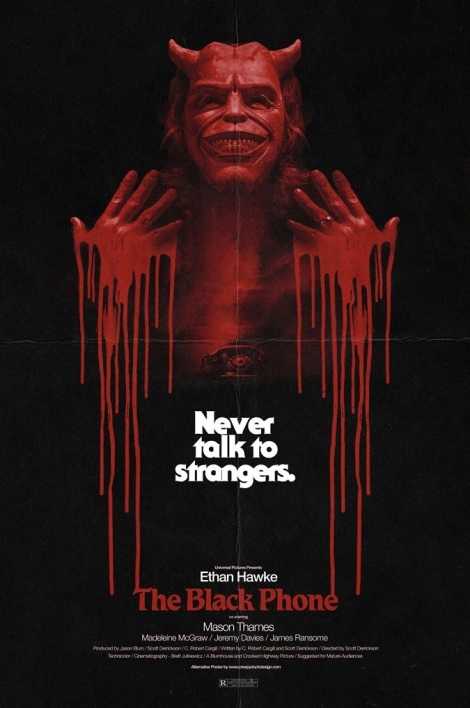