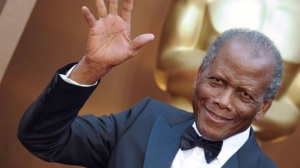 Late director, Sidney Poitier, will have his story told in documentary form via Apple Original Films. Apple is teaming up with talk show queen Oprah Winfrey, who will serve as executive producer. The duo has been working together for over a year alongside Poitier’s family to begin construction on the film.

The documentary announcement comes days after Poitier passed away at the age of 94. Known for his work as an actor, producer, and director, Poitier was also the first Black winner of the Academy Award for best actor in 1963 for his performance in Lilies of the Field. Poitier would go on to win a Grammy in 2001 as well as gain countless award nominations over his lengthy career. Poitier starred in films such as Porgy and Bess, A Raisin in the Sun, A Patch of Blue, To Sir, with Love, Guess Who’s Coming to Dinner, and In the Heat of the Night. He also directed films including Stir Crazy, Hanky Panky, and A Warm December.

Well known producer and filmmaker, Reggie Hudlin, is signed on to direct the upcoming feature. No stranger to the world of documentary filmmaking, Hudlin has helmed multiple films including 2019’s, The Black Godfather, which focused on the life of music producer Clarence Avant. Currently, Hudlin is set to work on two other documentaries for Apple TV. He will be directing Number One on the Call Sheet which will focus its lens on the history of Black men who star in Hollywood and will work on the film’s sister documentary which will focus on Black female stars in Hollywood. Hudlin will serve as executive producer on both.

Outside of documentaries, Hudlin has directed films including House Party and Boomerang as well as episodes of popular television shows such as TBS network’s The Last O.G. and Showtime’s Black Monday. In the behind-the-scenes world of production, Hudlin has been a recurring executive producer for the NAACP Image Awards.

In a statement to accompany the film’s announcement, Poitier’s family said,

To us Sidney Poitier was not only a brilliant actor, activist and a man of incredible grace and moral fortitude, he was also a devoted and loving husband, a supportive and adoring father and a man who always put family first. Although he is no longer here with us in this realm, his beautiful soul will continue to guide and inspire us. He will live on in us, his grandchildren and great-grandchildren — in every belly laugh, every curious inquiry, every act of compassion and kindness. His legacy will live on in the world, continuing to inspire not only with his incredible body of work, but even more so with his humanity.

No title has been released for the film yet, but as always stay tuned to Collider for all updates regarding this documentary on Poitier’s life.