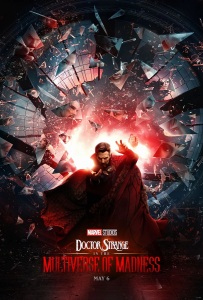 While three of the four images are essentially intense mid-shots of Strange, Wong, and Wanda, the still featuring America Chavez shows her engaged in a bit of action. At a time when online chatter about the rather unambitious visuals of Marvel movies seems to be experiencing yet another bump, these images certainly invite further dissection — especially since they don’t really reveal anything about the film’s closely guarded plot.

Directed by Sam Raimi and written by Michael Waldron, Doctor Strange in the Multiverse of Madness picks up after the events of Spider-Man: No Way Home, which debuted in December to resounding success. Recent Oscar nominee (and who knows, by the time this movie comes out, he might even be an Oscar winner) Benedict Cumberbatch returns as Strange, who inadvertently split open the multiverse in No Way Home. That gaffe allowed for Peter Parkers from alternate universes to show up in the MCU in aid of Tom Holland’s version of the character. It is believed that Doctor Strange 2 will further explore this concept.

Cumberbatch said, quite boldly, in a recent interview with Empire that the film will be just as successful as No Way Home. “There you go, I’ll put my flag in the sand,” he said.

While that remains to be seen, there have been quite a few rumors floating around the internet about who may or may not appear in the film. What we do know for sure is that Patrick Stewart will be back, although it is unclear who exactly he’s playing. Don’t expect any prizes for guessing he’s Professor X, though. Xochitl Gomez co-stars as America Chavez, who, according to Raimi, will give the “know it all” Strange multiverse-related lessons.

All eyes are also on the filmmaker, for whom this is the first feature in nearly a decade. Raimi famously directed each film in the original Spider-Man trilogy, starring Tobey Maguire. He replaced original director Scott Derrickson, who dropped out after citing creative differences.

The Sorcerer Supreme was first introduced in 2016’s Doctor Strange and has since appeared in Thor: Ragnarok, Avengers: Infinity War, Avengers: Endgame, No Way Home, as well as the animated Disney+ series What If…?

Also starring Elizabeth Olsen, Chiwetel Ejiofor, Michael Stuhlbarg, Benedict Wong, and Rachel McAdams, Doctor Strange in the Multiverse of Madness is slated for a theatrical release on May 6.

You can get a better look at the images here: