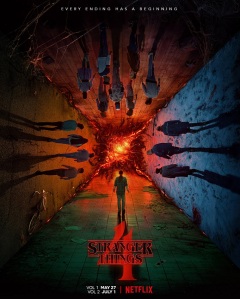 There has been so much anticipation for the upcoming fourth season of Stranger Things. While Netflix has been teasing us for months with various short trailers and stylish posters, fans have been eagerly waiting for the first full length trailer. Now, along with this new trailer, the streamer also announced who directed and wrote each of the nine episodes.

On the director’s side of things, The Duffer Brothers will be directing episodes 401, 402, 407, 408, and 409, which they also wrote. This should come as no surprise as they created this iconic horror series. Over the first three seasons, the pair have directed 14 out of 25 episodes and have written 11 of those episodes. In addition, Shawn Levy will also return to the director’s chair this season. Levy directed episodes 403 and 404. Like The Duffer Brothers, this should come as no surprise as the Stranger Things producer has directed six episodes of the series so far. In between Stranger Things seasons Levy has had some time away from the series directing other high-profile projects. His recent two action-comedy features Free Guy and The Adam Project were major hits. Levy has already been a great director for this series, but he will definitely have some new tricks up his sleeve given the added experience he has gained from those two films.

Lastly, the new director for the season is Nimród Antal who will be directing episodes 405 and 406. Antal is best known for directing feature films like Control, Armored, Predators, and The Whiskey Bandit. He has also directed 4 episodes of the Apple TV+ series Servant. Stranger Things has always done a nice job of mixing up their directors in between The Duffer Brothers and Levy, so it will be interesting to see what kind of voice Antal will bring to this more epic-feeling season.

On the writers’ side of Stranger Things, besides The Duffer Brothers, there will be four other writers featured this season. Caitlin Schneiderhan wrote episode 403, Paul Dichter wrote episode 404, Kate Trefry wrote episode 405, and Curtis Gwinn wrote 406. Almost every writer here has written at least one episode for the show so far. The only new writer this season is Schneiderhan who previously wrote for the podcast The AM Archives. However, Schneiderhan has first-hand knowledge of this expansive horror universe as they have been credited as an assistant to The Duffer Brothers for the last three seasons of the show.

From the looks of this new trailer, Season 4 is starting the ticking clock to a mysterious war that will presumably play out in these last two seasons. The Duffer Brothers have previously called this upcoming story the “Game of Thrones season” in terms of its massive scale and the trailer only reinforces that notion. Given that they are directing the final two episodes of the season once again, fans are sure to be in for a real genre treat.

The first half of Stranger Things Season 4 premieres on May 27, 2022, before wrapping up its penultimate story on July 1, 2022. Until then, you can watch the trailer down below: