Synopsis – A high voltage tale of action and romance with Tiger’s impressive avatar as Babloo, Tara Sutaria as Inaaya and Nawazuddin Siddiqui’s character of Laila.

My Take – Though he marked his big screen debut in the below par Heropanti (2014), Tiger Shroff provided enough glimpses at his potential to be widely accepted. With his athletic build, and insane dancing skills, Tiger brought a youthful, millennial appeal which looked all set to travel much farther than his father, Jackie Shroff, ever had.

But over time, it became evident on what to expect from films starring the lad in the lead (with 2019’s War being an exception) – a stunning leading lady, an unconvincing antagonist who can employ a massive army of henchmen, elaborately choreographed songs, and a series of high octane action sequences to showcase Tiger’s mastery in various kinds of martial arts. Resulting in a hit or miss success ratio.

Here, in order to further cement his position, frequently collaborators producer Sajid Nadiadwala and director Ahmed Khan, set their latest venture on a much grander scale (in comparison to its predecessor), filling it with enough booms and colors to light up the screen, and even bringing in Oscar winning music maestro A. R. Rahman to compose and breath further life into the action potboiler.

Unfortunately for everyone involved, nothing works here. While the 2014 Sabbir Khan directorial was itself tacky and dated plot notwithstanding, it was at least engaging and focused thoroughly on presenting its debutantes (the other being Kriti Sanon, who makes a cameo here) to audience. However, this Ahmed Khan (Baaghi 3, Lakeer, Fool & Final) directorial on the other hand, just seemed determined to be more scattered, illogical, and lazy than anything they had done before.

Sure, as promised, the film is high on action and some of its effects even work on a few occasions, but the rest of the time, it’s unbearable. Just basically a series of set pieces featuring Tiger Shroff prancing, romancing, and dancing with Tara Sutaria, when he is not mowing down bunches of extras.

As a director Ahmed Khan, seems to be stuck in loop, still unwilling to grow himself, and let Tiger away from the high and success of Baaghi 2 (2018), still determined to recycle those shenanigans. 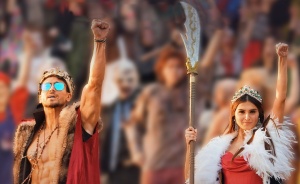 The story follows RJ (Tiger Shroff), a young man, living the quiet life with his mother (Amrita Singh), in Yorkshire, but constantly facing the trouble of switching jobs, due to his stand of not resorting violence. However, everything begins to unravel when he is spotted by Inaaya (Tara Sutaria), a self-made millionaire from the gaming industry, who alleges that RJ is actually her ex-boyfriend and an infamous hacker, Babloo Ranawat.

Who a few years ago used to be under the employment of her brother, Laila (Nawazuddin Siddiqui), a hobbyist magician and cybercrime kingpin, and had thwarted his and his cabal’s running operation of scamming oblivious mobile users, by hacking their data and bank details through game apps, with the help of CBI officer Azaad Khan (Zakir Hussain).

Now with an army of blood thirsty killers eying to destroy him, RJ/Babloo is left with no option but to take on everyone that opposes him, and put a stop to Laila’s latest dastardly plan from going into action.

In order to deliver a big screen experience, director Ahmed Khan and team have no doubt left no stone unturned to deliver a film that is relentless on scale, unfortunately, nothing else falls in line, especially the lackluster screenplay. Which is more of a culmination of some action blocks inter-tweaked with randomly infused songs, humor and a bit of romance and emotion.

Writer Rajat Arora and Sajid Nadiadwala‘s story appears jaded at so many places and you struggle to believe that the Hindi film industry is still churning out such films for the sake of keeping their commercial value intact. Even if you wish to pass this one as a typical potboiler with action, romance, and dance, it just falters at so many levels. It also doesn’t help that the editing is a mess, making it really tough to identify the past and present in this film.

Like the Baaghi films, here too, the plot takes a back seat to the prospect of watching high-octane stunt duels. Which would have been fine, to an extent, if those sequences would have been entertaining. Marred by lousy CGI and too many luxury cars, the film just aims to please people with low IQ.

However, the most surprising element of the film is A. R. Rahman‘s music. Here, the songs pop up randomly and the composer fails to give even one decent song, leave alone a good one. Even the BGM doesn’t blend properly with the fictional world of the film.

Performance wise, Tiger Shroff seems to sleep walking for a major part of the film. Despite showing immense promise in War (2019), Tiger seems to be getting monotonous performing the same form of action, with almost a similar set of expressions in every succeeding film.

Saddled with one of the most badly written female characters in recent times, Tara Sutaria is left with no scope to perform. For most parts of the film, she is playing a silly woman in skimpy clothes who gets on your nerves for not being able to see or figure out even the most obvious. And to give her character a comic twist, she is made to scream at the top of her voice under the garb of humor.

Nawazuddin Siddiqui hams from the word go. Acting more like an extension of his character Shiv Gajra from Kick (2014), here, Nawazuddin is ridiculously all over the place. In thankless roles, Amrita Singh and Zakir Hussain are just wasted. On the whole, ‘Heropanti 2′ is an intolerable action thriller marred with lazy writing, poor execution and ridiculous characters.