Back in March, Netflix surprised us on Panda Day by revealing that a new Kung Fu Panda series was in the works. At the time, the streamer announced that in Kung Fu Panda: The Dragon Knight, Po (once again voiced by Jack Black) would be joined in this new adventure by an English knight. Now, it’s finally time to follow up on that: the knight is named Wandering Blade and Rita Ora is set to voice her! In the series, Po and Wandering Blade set out on a mission to find and retrieve a set of powerful weapons stolen by two weasels.

Kung Fu Panda: The Dragon Knight marks Ora’s first major role as a voice actor. It’s not the first time that the world-famous pop star doubles down in acting, though: fans of the Fifty Shades of Grey trilogy might remember her as Mia Grey, the sister of billionaire heartthrob Christian Grey (Jamie Dornan). Ora was also in Pokémon: Detective Pikachu, Southpaw, and even cameo’d in Furious 6.

Along with Ora’s announcement, Netflix revealed some first-look images of her character, who looks like a full-blown knight, with armor and an awesome-looking sword – and it should make for a funny contrast with Po, who’s normally only “geared up” with his shorts. Wandering Blade also has a distinct three-pronged mark on her forehead, as well as a big scar on the left side of her face, which suggests she’s seen her share of battles.

In addition, Netflix took the opportunity to announce that a franchise old-timer is also returning along with Jack Black. James Hong (Everything Everywhere All At Once) is reprising his voice role as Po’s father Mr. Ping. Hong has been a frequent collaborator across the franchise’s spin-off series: He played Mr. Ping in Kung Fu Panda: The Paws of Destiny and Kung Fu Panda: Legends of Awesomeness.

Other voice cast members include Chris Geere (This Is Us) as Klaus Dumont, Della Saba (Physical) as Veruca Dumont, Rahnuma Panthaky (Teen Wolf) as Rukhmini, Ed Weeks (The Mindy Project) as Colin, and Amy Hill (Magnum P.I.) as Pei Pei.

Netflix is yet to announce a release date for Kung Fu Panda: The Dragon Knight. Check out the rest of the new images below. 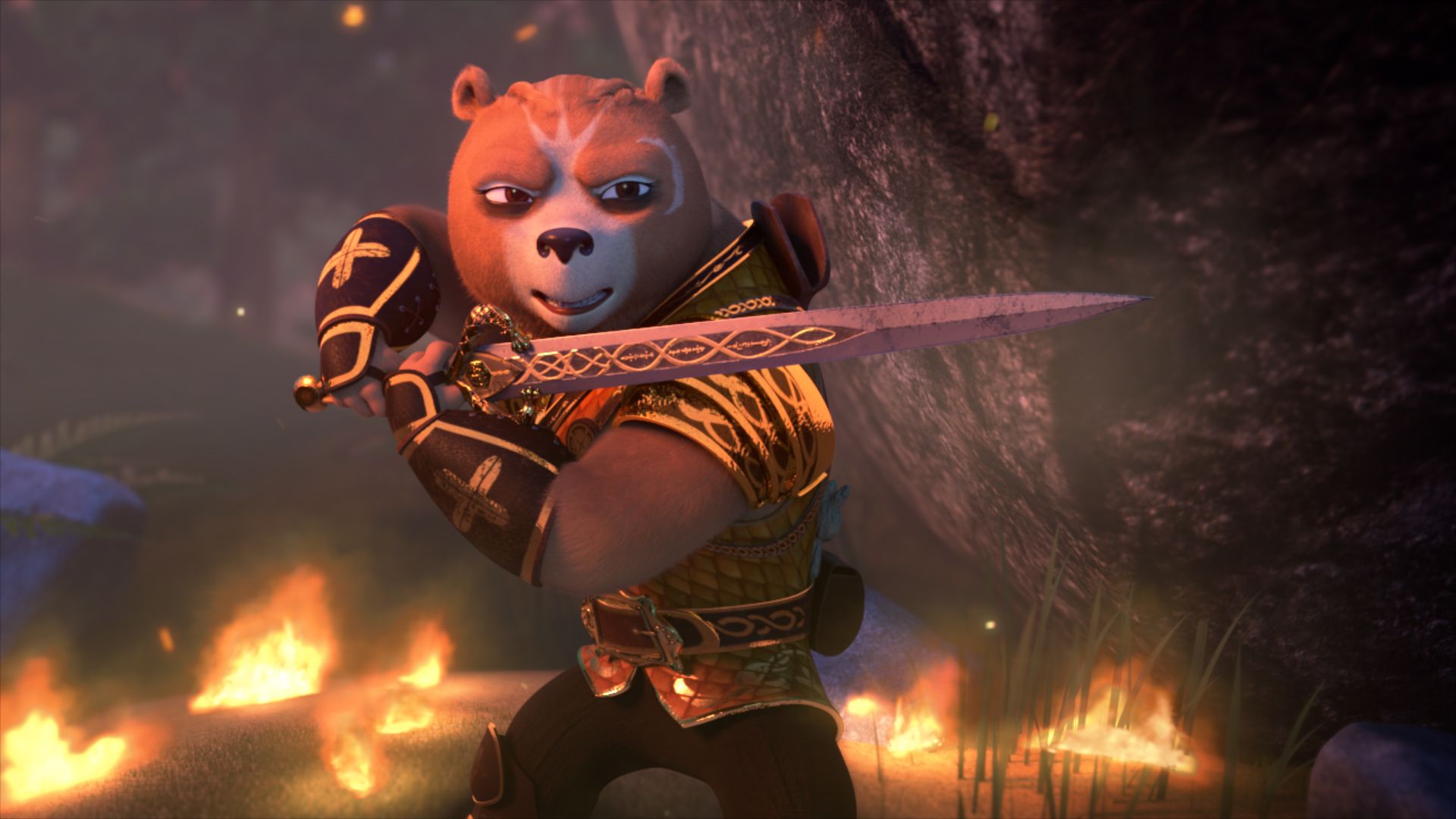 You can check out the official synopsis of the upcoming animated series here:

Jack Black returns to ‘Kung Fu Panda’ in the new series ‘Kung Fu Panda: The Dragon Knight’. When a mysterious pair of weasels set their sights on a collection of four powerful weapons, Po must leave his home to embark on a globe-trotting quest for redemption and justice that finds him partnered up with a no-nonsense English knight named Wandering Blade voiced by Rita Ora. Together, these two mismatched warriors set out on an epic adventure to find the magical weapons first and save the world from destruction — and they may even learn a thing or two from each other along the way.