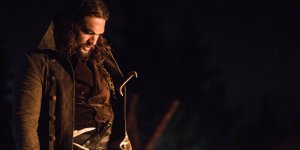 Jason Momoa has become one of the hottest stars in Hollywood. His role as Aquaman in particular has stolen the hearts of many genre fans and Momoa’s next project is staying in the family. Reported exclusively by Deadline, Momoa’s murder mystery tentatively titled The Executioner has landed at Warner Brothers after an intense bidding war. The screenplay for the project was written by Eternals‘ writers Kaz and Ryan Firpo.

The film’s plot is under wraps, but it is being pegged as “a fun action murder mystery in the spirit of Knives Out meets The Lord of the Rings”. Peter Safran will be producing for WB. He should be a familiar name for genre fans as he has been a part of some of WB’s biggest franchise successes, producing The Conjuring, The Suicide Squad, Shazam!, and Aquaman.. The producer was also a part of The Suicide Squad spin-off series Peacemaker for HBO Max. The Conjuring and DC have both been franchises that have passed the $2 billion mark for Safran.

One of those billion dollar films was the Momoa starring Aquaman. That film’s highly anticipated sequel Aquaman and the Lost Kingdom is set to hit theaters next March. However, beyond just Aquaman, Momoa his shown he can be more than just a broody superhero with films like Dune and Sweet Girl. He also starred in hit shows Game of Thrones, See, and he is currently working on a new Apple TV+ series Chief of War. The actor will be seen in upcoming films like Fast X and the Minecraft film as well, the latter of which will also be a WB produced project.

On the writing side of things, the Firpos put a great blend of humor, heart, and drama into Eternals. The emotional scope of that superhero epic is severely underrated. This all bodes well for a film that is trying to smash together two wildly different genres. There is so much talent behind this project and the concept sounds really fun. It is easy to see why there was a bidding war over this project. The murder mystery genre has seen a bit of a resurgence in recent years with the previously mentioned Knives Out, Kennth Branagh’s Agatha Christie adaptations, and the revival of Scream. It will be exciting to see Momoa in this kind of heightened environment and how the “Lord of the Rings scope” will be applied to the story.

The Executioner does not have a director attached to the project or a release date yet, but we are sure to uncover more about this mysterious film as it gets closer to its production.