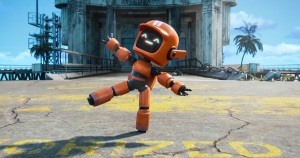 Netflix unleashed the final trailer for Volume 3 of Love, Death + Robots ahead of its release tomorrow. The trailer gives us a peek at the nine new episodes of the anthological series’ third volume while also making a surprising homage to British philosopher Alan Watts.

As expected, the final trailer for Volume 3 of Love, Death + Robots highlights the different animation techniques used by the crews of the nine new stories. Created by Tim Miller and David Fincher, Love, Death + Robots invites teams of artists and screenwriters to produce short stories about fantastic discoveries, distant corners of the galaxy, or surreal events. So naturally, that leads to a huge variation both in narratives and in art direction, making each episode of Love, Death + Robots a self-contained spectacle.

In Volume 3, we’ll have ultra-realistic 3D stories such as Jibaro, a story about a siren who fails to charm a deaf warrior. We’ll also have fully 2D episodes such as The Very Pulse Of The Machine, in which an astronaut must drag the body of her co-pilot while under the effect of hallucinogenic drugs. Volume 3 of Love, Death + Robots will also have an episode directed by David Fincher, in which a group of sailors battles a highly-intelligent sea monster. There’s something for everyone, and Volume 3 promises to feature some of the most inventive stories the series had the pleasure to present.

The new trailer also has a surprising nod to Watts, a scholar famous for making oriental philosophy more known in the Occident. While we see all the stunning images of the nine stories of Volume 3, we hear Watt’s iconic “The Dream of Life” speech. In the speech, Watts defends the idea that we should all embrace our existence and rejoice in being part of this world. It’s a beautiful speech that invites us to embrace the present and do the most with our lives, and it’s exciting to see it related to Love, Death + Robots.

Volume 3 of Love, Death + Robots debuts on Netflix on May 20. Check out the new trailer below:

Here’s the synopsis for the third volume of Love, Death + Robots: