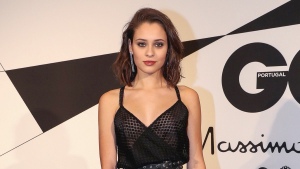 Star Daniela Melchior has shared the first behind-the-scenes pictures of her Fast X character. While Melchior is still keeping secret about whom she’ll be playing in the new installment of the Fast & Furious franchise, the new images give us little hints and tease a connection with the Toretto family.

As Melchior reveals on her Instagram account, her character in Fast X sports a couple of tattoos on her left arm. One of these tattoos represents a rosary wrapped around her wrist. While the tattoo already points toward the religious background of Melchior’s character, it could also be a link to Dominic Toretto’s (Vin Diesel) famous cross necklace. Across the Fast & Furious franchise, Dom uses his necklace as a way to express his love for his family, passing the piece of jewelry to people he wants to protect. The necklace is part of multiple subplots in several movies, which means Melchior’s tattoos could be keeping the family tradition of using Christian symbols.

As recurring Fast & Furious star Tyrese Gibson revealed, Fast X will flesh out Dom’s backstory. Last week, Puerto Rican legend Rita Moreno was cast as Dom’s grandmother, underlining how the Toretto family is growing for the sequel. So, it wouldn’t be a stretch to think Melchior could be playing another member of the Toretto family, especially since F9 already had Dom fighting his long-lost brother (John Cena).

Portuguese actress Melchior had her Hollywood breakout in James Gunn‘s The Suicide Squad. The star stole our hearts by playing Ratcatcher 2, the emotional core of the film’s team of supervillains, with led her to being cast as part of Fast X. Before Fast X, Melchior is set to star in this year’s spy movie Assassin Club with Henry Golding, Noomi Rapace, and Sam Neill. Next year, she’ll also show up in neo-noir thriller film Marlowe, together with Liam Neeson, Diane Kruger, and Jessica Lange.

While the plot of Fast X is being kept under wraps, the sequel will be the first part of a two-movie story that’ll reportedly end the franchise. Fast X will star Jason Momoa as the movie’s main villain, yet another big superhero star who gets involved with the franchise after Wonder Woman’s Gal Gadot and Peacemaker’s John Cena. Finally, the newcomers’ cast also includes Brie Larson, currently Captain Marvel in the Marvel Cinematic Universe, and Alan Ritchson. Returning cast members include Chris “Ludacris” Bridges, Nathalie Emmanuel, Jordana Brewster, Sung Kang, Charlize Theron, and recently announced Scott Eastwood.

After co-writing and directing F9, Justin Lin was set to helm both parts of the Fast Family final adventure. However, after disagreements on set, Lin quit the director’s chair, being replaced by Louis Leterrier (The Incredible Hulk).

Fast X will drive into theaters on May 19, 2023. Check out Melchior’s original post below.