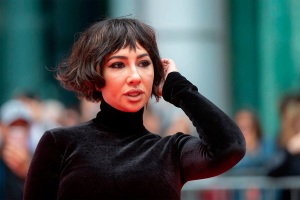 Actress Jackie Cruz has replaced Stephanie Beatriz as co-lead in the upcoming horror-thriller movie History of Evil, as reported by Deadline. Cruz is set to headline the film alongside Paul Wesley. It was reported that Beatriz exited the project due to scheduling conflicts.

Cruz, a Dominican-American actress and model, has been part of the entertainment industry for over a decade. However, she got her big break in 2013 when she landed the role of Marisol “Flaca” Gonzales on Netflix‘s Orange is the New Black, where she was promoted to a series regular in 2015. Prior to her appearance on the Netflix comedy-drama, she was also made appearances on Kourtney & Khloé Take Miami as a friend of Kourtney Kardashian.

Audiences might recognize Wesley from The Vampire Diaries where he played the role of Stefan Salvatore. He also appeared in the anthology series Tell Me a Story. Most people might not realize that he’s also a director and producer. His behind-the-scenes projects include producing four television shows for Warner Bros. Television, which include Confessions of a Drug-Addicted High School Teacher and Finding Natalie. He’s done work in theater as well, and along with his The Vampire Diaries co-star, Ian Somerhalder, has a bourbon whiskey called Brother’s Bond Bourbon.

The plot of History of Evil follows the story of a family running to escape a corrupt system and state. However, things take a drastically terrible and horrific turn as they take refuge in a house with an ‘evil’ history.

The film is directed by Iranian-American filmmaker Bo Mirhosseni, known for writing and directing the short films Lovely Day and Glue; he has also directed several music videos. It was reported that producers of the movie include XYZ Films’ genre specialists, Two & Two Pictures, and Jake Siegel.

History of Evil is the first production involving the pact between XYZ Films and Two & Two Pictures to create film projects from “first and second-time genre directors from under-represented demographics.” The plan is to release up to three movies a year. Deadline reported that this pact stemmed from the success of XYZ and Two &Two’s collaboration on Babak Anvari’s Under the Shadow, which won a BAFTA for Outstanding Debut. The production companies worked with Anvari once again on I Came By, which is in the post-production stage at Netflix.

History of Evil has a great set-up for a creepy horror film, plus, it’s also great to see production companies band together to support under-represented demographics and bring forth fresh high-quality filmmaking. While details are sparse at the moment, be sure to check back in with Collider for updates on History of Evil.